Fact of the Day: Cathedral of Christ the Saviour in Russia 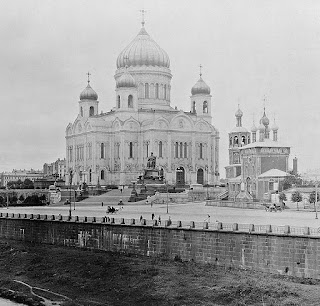 After Napoleon's defeat, Russia built the Cathedral of Christ the Saviour in Moscow to celebrate their victory over the French Empire. When the Soviet Union took over an Imperial Russia, the church stayed until the rule of Joseph Stalin who had it demolished for the site of Communist legislature though that never came to be when the Germans invaded during World War II. The Russian Orthodox Church rebuilt the church during the 1990's with it being finished in 2000. However in 2018, the church leaders there realized the foundations were sinking and were in need of repair.
Posted by Adam at 12:00 AM

Gotta love religion and their churches

Wow! To have it need repair so quickly is interesting. Doesn't sound like they gave it their all by the time they finished it up in 2000. Hugs...RO

That must have been quite a shock.

This sounds like a church that was just not meant to be.

Obviously never meant to be.
However it did last a fair period from the retreat of Bonaparte to the
rise of Stalin.
Wasn't Moscow built over original swampy land from way, way back?
Colin