Fact of the Day: Lenin and Putin 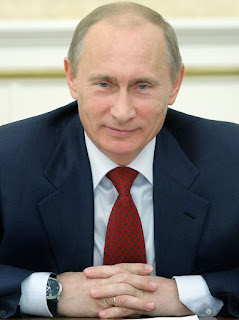 When communism and the Soviet Union fell, Boris Yeltsin became the leader of a new Russia. He (along with the Russian Orthodox Church) wanted to remove Lenin's preserved body and give him a proper burial next to his mother. His successor Vladimir Putin opposed this as it would be making a statement that Russians were living under "false values" during the seven decades of Soviet rule.
Posted by Adam at 12:00 AM

One has to wonder whether that's even really Lenin's body, though. Preserving a corpse so well for almost a century wouldn't be easy. The communists probably weren't above using a little fakery in support of those, yes, false values.

I was just at a play last night called "Lenin's Embalmers." It was a tragi-comedy about embalming Lenin to last forever. Lenin himself had wanted to be buried without even a monument to mark his grave.

Family is family, so this is pretty sad. Hugs...RO

Leave him where he is.

Then again he could be moved to the USA and reburied in the churchyard of some evangelical or fundamentalist religious mob. That would give them something to hoot and holler about - ha ha!
I can think of a lovely right wing small city in Texas that would welcome Lenin with open arms. Oh I am being naughty!
Colin

Lenin's preservation has nothing on St. Anthony of Padua's tongue. When I was in Padua, Italy about a month ago, I saw a reliquary containing his "uncorrupted" tongue which was purportedly almost 800 years old! Also a second with his lower jaw and teeth and a third with his larynx! Gross, but then so is Lenin's body which I have not seen. I wonder what monuments Putin imagines being raised to honor him?