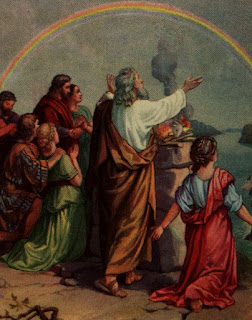 The oldest person to live (with proof) was 122 years old. Many others have made claims of a much higher age with no proof. Religion had never been a stranger to making such unbelievable claims. The Bible has ten characters that claim to have lived past 500 years. Noah and Adam were supposed to be over 900 at the time of death, though Methuselah was supposed to have been the oldest living at the age of 969.
Posted by Adam at 12:00 AM

Email ThisBlogThis!Share to TwitterShare to FacebookShare to Pinterest
Labels: Christianity, fact of the day, Judaism

Wouldn't it be fascinating to know their true ages?

They were aliens. That explains it, right? No proof needed.

The Bible has always been shakey on math.

I think the writers didn't want the Garden of Eden to be that far removed from the other events in The Book of Genesis (which, after all, ends in Egypt at the time of the Pharaohs) So, by claiming everyone lived longer, they so could say Adam and Eve were only a few "generations" away from a populated Earth.

Fictional characters don't work like that. There's no difference between them than Bugs Bunny or Homer Simpson.

And facts, logic, and morals.

The Husband thinks that they were names of dynasties as in China.

ha ha - well they had MUCH shorter years way back then.
Colin

HAHAHA! This made me laugh :)

I'm certainly in the minority here because I believe the Bible and that it is the inspired word of God and these people you speak of were real.

How bloody true - just viewed your blog.
You sure are a biblical wonder - ha ha!
I suppose you firmly believe that the world was made
in 7 days????
I really thought that people who live in Maryland lived in the real world.
Colin

Given where I am at sixty-eight, I certainly wouldn't want to live until I was 969! Maybe only 500! LOL