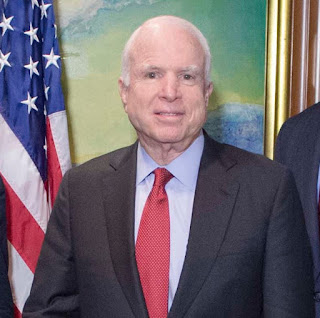 "I will not take the low road to the highest office in this land. I want the presidency in the best way, not the worst way."

In 2008 I did not want John McCain to be President of the United States, and I proudly voted for the then-Senator Barack Obama. Politics can blind everyone and anyone, but on reflection, John McCain led a noble campaign of honor and integrity. I suppose Sarah Palin was there to provide that redneck Jerry Springer-esque garbage into U.S. politics. Donald Trump didn't take this route to be president, but since he let Russia help him, he won it in the worst way. To put things in perspective, John McCain lost in a electoral landslide at 45.7% of the popular vote, Trump won an "impressive" electoral victory despite having 46.1% of the popular vote.
Posted by Adam at 7:28 PM

He is missed, Adam

A man of integrity McCain was.

They are totally different from each other.

Would he have been able to deal with the financial crisis GW left us? Oh gosh I don't even want to think of the antics Palin would've played. Shudder.

I do not get into politics but I respect your opinion and thoughts.

I did respect and admire John McCain at one time. But he didn’t take the high road on his campaign as he said he would. And he gave us Sarah Palin. Over the years he undid a lot of his own bridge building and good works. But still miles above trump as a human being

McCain had beliefs that many American (and even I) didn't agree with, but he was truly a man of integrity. It was really a sad day to see him pass away. The GOP is a big joke, now more than ever!

Mr. McCain was never a favorite of mine..however, I would take him over Obama a million times.
I do respect your opinions, Adam...even tho we differ on all political things...you have given me fuel for thought on some things.

Yes you would prefer John to Barack, John McCain was white!
Get back into your bigotry box and close the bloody lid.
Colin

I admired John McCain for a number of reasons, even though I disagreed with him on political issues.