Melania Trump Thinks She's the Most Bullied Person in the World 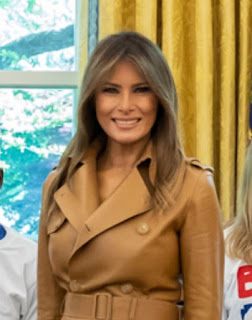 Yes she literally said that. I mean if you're a model turned gold digger turned First Lady you have to imagine that you'll have some criticism. I never heard a line from the left wing about her that wasn't true. I have heard right wingers claim that Michele Obama is a man (and they seriously believe it) despite having two children, and that Hillary Clinton is somehow more powerful and evil than any dictator ever known. And let's not forget the people who are LGBT who often commit suicide or suffer depression because they are bullied. Most bullied person in the world huh?
Posted by Adam at 11:56 PM

It is better that she keeps her mouth shut and enjoy the life style she sold herself for.

She is married to the biggest bully in the world.

She might be relating herself to being married to the bully of the world. Unfortunately she married him which would never have done if he was Don Trumpf from Wisconsin who only collected his small pension

The whole Trump family truly believes they are the centre of the universe. She is just as despicable as her husband.

Maybe she meant to say that she's married to the biggest bully in the world. She's probably too dumb to know the difference.

Most self-absorbed person in the world...wait, that's second to her husband.

Kirsty Vittetoe's comment has hit the nail on the head!

Nothing material that she has would motivate me to marry the kind of man she has.

She means by Donald. We know how she communicates!

The whole lot are so self-absorbed.

All very good comments above.

Funny - nothing from the supporters of this creature!
Ah well - maybe they are all back in the gopher holes of shitsville where they belong.

The whole Turnip tribe are misfits, bullies and liars.
May they all burn in their own holocaust insides the fences of 1600 Penn. Avenue.
Colin