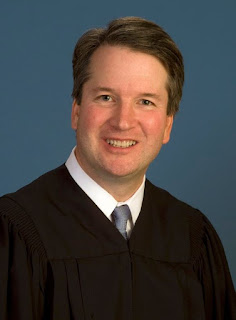 "I liked beer. I still like beer."
-Brett Kavanaugh

We've caught Kavanaugh lying under oath, showing a bad temperament under pressure, and admitting to wanting to be extremely partisan in his judging if the Senate is stupid enough to confirm him. I thought federal judges were suppose to be smart. Because if I was being accused of a horrid act like he is, I think my defense would be a little more eloquent than expressing my love for a beverage that often causes odious behavior and atrocious decision making. This guy isn't even fit to be nominated to work a food court, let alone the Supreme Court of the United States. Yet so many Republican Senators are vowing to vote for him. When I didn't think the Republican Party could sink any lower, they show that rock bottom does indeed have a basement. Republicans know they're going to lose an election and they'll lose their chance to implement Republican fascism through the judicial branch. They're getting pathetic as they start to sweat.

I could not have said it better! Who keeps their calendar from college days?

And soon to be a Supreme Court judge for the rest of our lives. Appalling!

i Second that amen !

I can't for the life of me see anything wrong with this fellow liking a few beers - he was so it seems naughty when a high school/college student as he was well underage when he had too many. So it would appear was the accuser. I am staying NEUTRAL on this one - young kids do make mistakes and "people who live in glass houses, shouldn't start throwing stones".
In Australia the age of being able to go for drinks in a bar, club etc etc is 18 years........wake up Yanks, this 21 business is BULLSHIT!

I strongly disapprove of the lunacy of appointing a Supreme Court Justice for life..............they do get very much to the dottage stage. Here in Australia and I would think in Canada and most other sensible democracies, justices appointed to the High Court have to resign when they reach 70 years of age.

And now more insults by the loonies of the White House, Melanie Trump on an African tour of "GOODWILL" (?????) parading around in a PITHE HELMET hat! That is a relic of the cruel colonial days of the white master...........the Africans are not amused, they are insulted.
But why care???? Aren't these people all BLACK?????????????
Can anyone in their right minds think that Maime Eisenhower, Jacqueline Kennedy, Lady Bird Johnston, Patrica Nixon, Betty Ford, Nancy Reagan, Roselyne Carter, Barbara Bush, Hillary Clinton, Laura Bush or Michelle Obama would be seen doing this????????????

Then again I await an excuse from the likes of Ms Sassy Sweet, wasn't she the one who referred to Ms. Trump as a 'CLASSY LADY WITH WONDERFUL TASTE"!!!! Yeh, tastes that would suit a "TART" or a BABY DOLL!

"Melanie Trump has prompted consternation, some anger and much derision by choosing a pith helmet – a symbol of colonial rule across Africa – as headwear for a brief safari in Kenya.

On the penultimate day of her tour of the continent – her first solo trip overseas – the first lady visited an orphanage in Nairobi before heading to a national park near the city.

Dressed in riding pants, boots and a spotless white pith helmet, the former model climbed into an open-air vehicle for the safari, taking photos on her iPhone of zebras, giraffes, impalas, rhinos and hippos.

She also stopped at a site where 105 tons of ivory was burned as part of an effort to discourage the trade.

But it was the headgear that attracted most attention. Pith helmets – so-called because they are made of the material sholapith – were worn by European explorers and imperial administrators in Africa, parts of Asia and the Middle East in the 19th century before being adopted by military officers, rapidly becoming a symbol of status – and oppression."

Aaaaaaaaah , yes I wonder what that Hucklebee-Sanders "Tart' will address this question.......she'll have to even excel her mentor, Paul Joseph Goebbels on this one - ha ha.

I hope he gets impeached.