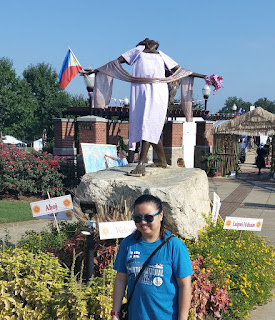 At my city's international festival, one country gets to be the new "honored" country every year. Meaning they get a huge space to educate the masses of the crowd about it. They always dress the statue up in clothing native to the honored country. 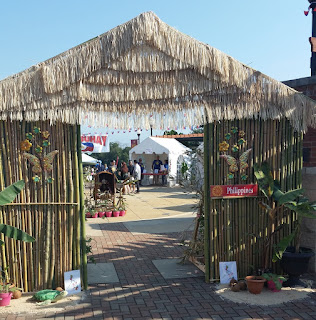 The entrance reminded me of something a Filipino-American guy once told me. He said some parts of the Philippines were like a regular urban city anywhere in the world, but some of the rural parts were straight out of Gilligan's Island. And that's sure what I thought of when I saw this entrance. 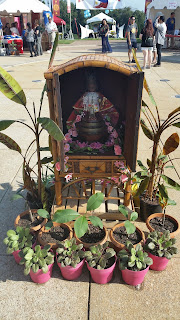 The most disappointing thing is that the square is suppose to showcase something really cool and big. But all there was a shrine which I'm guessing is based in Catholicism. Spain colonized the Philippines centuries ago and surprise surprise, they forced the local people to adopt their religion and probably with force too.
Posted by Adam at 12:00 PM

Such an awesome event!

Filipinos I know are devout Catholics to this day.

My dad, who was born in 1905 in the Philippines was not a practicing Catholic. Yet, when as a teen, I checked out different denominations for the fun of it, he nicely, but firmly, put his foot down and essentially told me to wait until he died. I guess he was hedging his bets in case the Roman Catholic church was right. lol
That's pretty cool your city honors a different country each year.

The Philippines is a dominantly Catholic country which of course is due to the Spanish colonisation of it. So what?????

I'm not sure the this summation Adam would go over too well with the Filipinos - "some of the rural parts were straight out of Gilligan's Island. And that's sure what I thought".
Have you visited the Philippines, Adam???? I'm bloody sure that you have not, as the Washington,DC trip appears to have been your longest flight.

Filipinos are a proud people - just remember WW2!
The US War Memorial just outside Manilla would blow your top off, Adam.
It is huge and the mosaic work on the pillars depicting the various battles in the Pacific is so moving and beautiful.
It is a testimony of the appreciation of the Filipino people to the bravery of the Allies in driving out the cruelty of the Imperial Japanese occupation government.

The rural areas of the Philippines have a beauty of their own and they don't possess the hilly-billy likes of Alabama, Mississippi and Tennessee or the loud mouth of the "hei-ho" state of Texas bigotry.

It's a great idea to honor a different country like that each year.

Kudos to Spartanburg for hosting an International Festival each year! We have a friend who retired in the Philippines, and he loves it. It's a country I'd definitely like to visit. Cute photo of Daisy, as always. Have a good day tomorrow, Adam!

I always enjoy these types of festivals. It's fun to learn about different countries and different cultures.

I had several pen pals from the Philippines when I was in middle school. They are such lovely people. I am itching to travel there some day and immerse myself in everything they have to offer.

These festivals are pretty cool, and we love when you share info about your trips! Hugs...RO

The "genie" (?) out of the bottle for air.
Adam has my e-mail address and I believe you have it also
from way back.
I do not insult Adam, I try to correct some minor
in-actuaries.
I have probably seen more of the USA, "bj" that you could dream of so I have a pretty good idea of what I am writing about.
The history of the Lone Star State is full of injustices and prejudices. I rest my case.
Colin

The shrine would have disappointed me, too.

How nice that your city honours a different country each year.

The reason I have been "in the bottle" for a year is because I lost my husband of 57 years last year. Blogging was at the very bottom of my list during one of the hardest times in my long life.
You DO insult Adam...and all of us. I could care less of how much of the USA you have seen...that is a tiny matter that has nothing to do with being a mean old man.
You can state facts...or your beliefs, in a nicer manner.
And I asked you several years ago for your email address and you never responded. I am asking again now...I would LOVE to fight with you on your site...not Adams.