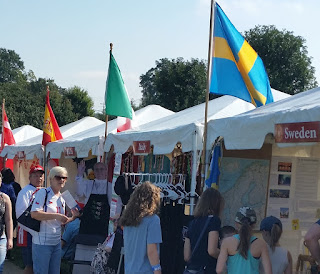 All of the other countries get their little tents while the Philippines got the big area this year. Since I've been for several years, most of this is deja vu. 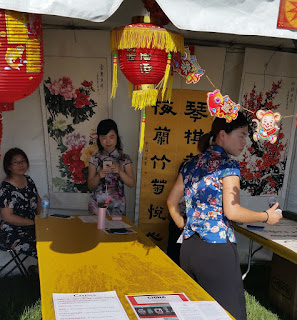 A lot of the tents have people dressed like their native country. I always think feminine Chinese clothing is so pretty. 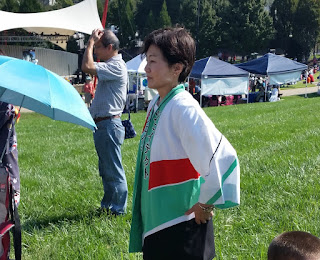 I was trying to get a good photo of Japan's tent and the kimonos but too many people were in the booth and were in the way of the photo. This lady was standing outside the booth. She has some katakana lettering on her outfit (which is typically used to spell words foreign to the Japanese language) but I couldn't figure it out even later. One translation said something about "get to the station!" but I don't know about the rest of the words. 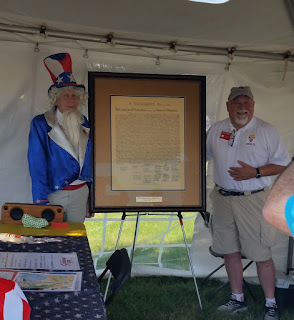 And just in case you forgot what country you're in, the America booth...
Posted by Adam at 12:00 PM

I'd love to visit that festival.

appreciate you bringing us along!

These international festivities days are quite common here in Australia.
The food stalls are very popular.
A very good learning experience.Wets the appetite fro travelling, and Aussies are at the top of the tree when it comes to overseas travelling.
Colin

Uncle Sam could use a haircut.

Festivals are so fun and informative.
Coffee is on

What would be a classic American look? Jeans, sneakers, and tee-shirt?

I think Chinese clothing is pretty too, but I'd like to see some of the Indian attire. It's always fascinating to me because it's so colorful!

I think festivals like this are fun and colourful.