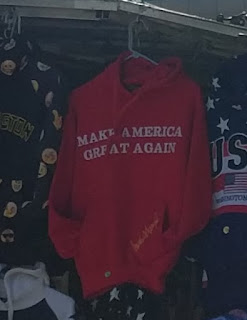 When I was in Washington D.C. there was a lot of tourists, including a lot of middle or high school kids on school trips. There was always a few in every group that were wearing those awful Trump hats or T-shirts. I expect that out of their racist elders, but the Generation Z kids need to be a little smarter than that. Washington D.C. is heavily liberal with its residents, I can imagine that a few of those kids hopefully realized President Cheeto isn't exactly a popular man over there once they started talking to the people who worked there.
Posted by Adam at 11:00 AM

Many kids are heavily influenced by their parents until they grow up and start thinking for themselves. IF they ever do that.

I see that your President Cheeto is being abandoned by his UN Ambassador
and he of the idiot brigade has floated the idea of his useless daughter as the replacement. Isn't she the one who has a clothing outlet - clothes made in China and sold to the Yanks at Yank ( not Chinese) prices???

The US circus gets better by the hour - forget the daily events. It is not hourly eruptions of insanity.
Now where are dearest Donald's "tea party, biblical clowns supporters",
Oh yes awaiting a lovely photo of Daisy's eating exploits!!!
I'll leave my thoughts of wisdom at this point for the time- being, but the hour cometh when I will explode at the "S.Coxes, DJ - Sweets and LV's" of the Yankie lunatic brigade.
Cheers
Colin

It is not hourly eruptions of insanity.

The young ones sometimes mimic the older folks or just go along with whatever their group focuses on. When they get a little older they might questions what they've been taught or question what they follow and stray from the peer pressure. Some of them, anyway.

As a teacher in elementary school, I always knew what my students' parents political and religious persuasions were. Children and even teens are heavily influenced by their parents. Sometimes their ideas and values change when they grow up, and sometimes they don't. I'm sure my students' parents knew everything about me too ~ LOL! Have a good one, Adam! I'm watching the track of Hurricane Michael and hoping that you and all the other people that might be in its path are safe and prepared and spared.

It's so sad to see the young ones being influenced like this. I saw that little boy in the background when your prez was bashing Ford...I can only hope he was smart enough not to listen.