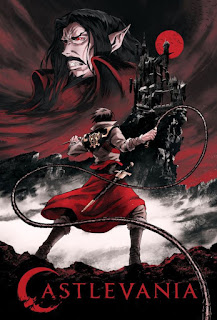 Most movies based on video games are usually pretty darn awful. TV shows fare better but not many exist outside of the children's cartoon genre. Castlevania was much different, it was drawn and produced a lot like a Japanese anime and it was pretty darn dark and didn't really hold much back in the realm of vampires and monsters. I have been a fan of the video game series, so I checked season one out. It had promised but it was way too short for its own good. Finally Netflix delivered on a season two that is the real deal. 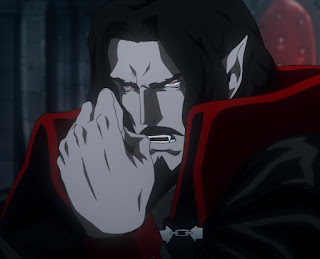 The story starts not long after the events of the first season. Lord Dracula is taking his final steps to eliminating all humans on Earth. His wife Lisa was pure human, but she was murdered by the Christian Church leaders for "witchcraft". Despite her pleas, they didn't listen. And since then Dracula had murdered all the priests responsible. But mere revenge isn't enough, he believes humanity has nothing left to offer in the world. 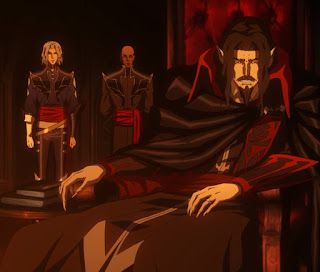 But Dracula can't declare war on the human race alone. He summons the greatest vampires from all over Europe, Africa, and Asia. Though none of these vampires can hold a candle to Dracula's might. His two most trusted generals, are actually humans. Though Hector and Isaac are not "good" humans, they wield dark magic. Hector is especially good at creating creatures from the dead to join the ranks of the vampire army. 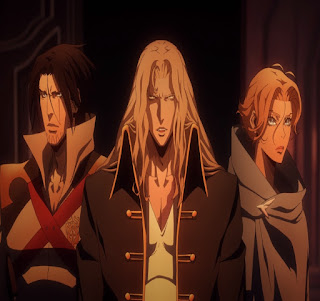 However the only three in the world capable of stopping Dracula and his army are well on their way to stop him. The first is Trevor Belmont, a vampire hunter and the last of his family's noble line. Then there's Sypha Belnades who has a kind heart, a beautiful face, but very strong magic from the realm of light. And lastly, Adrian "Alucard" Tepes whom is Dracula's half-vampire half-human son from his late wife Lisa. While Alucard cares for his father on a personal level, his human side allows the half-vampire to decide to stop his father from destroying humanity, which Alucard believes would be against his mother's wishes. 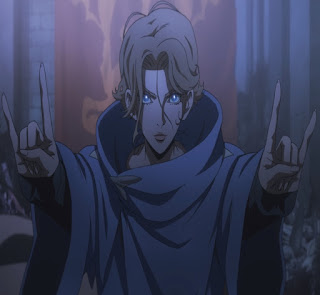 Overall Castlevania's second season certainly improves on the first. They add way more characters than I expected and had pretty deep plot lines with even the minor ones. The first and second seasons is mostly Castlevania III: Dracula's Curse in plot, but it seems they will head to Castlevania: Curse of Darkness' story next. But if they want to do a fourth season, they'll most likely have to resort to later Belmonts such as Simon and Richter.