Favorite Quotes: The Duty of the Vice President 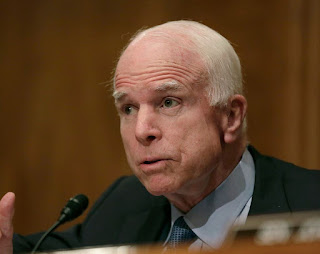 "The vice president has two duties. One is to inquire daily as to the health of the president, and the other is to attend the funerals of third world dictators. And neither of those do I find an enjoyable exercise."

Most Americans don't realize that the Vice President has almost no real power. Besides a tie-breaker vote in the U.S. Senate, that's all they really have. This was a pretty funny quote by John McCain as he was asked this in response if he wanted to be George W. Bush's running mate in 2000. Funny enough, his running mate Sarah Palin got caught not knowing what a Vice President's role actually was.

Every time I'm impressed with something John McCain said or did, I think "Oh, wait, Sarah Palin."

My God John rued the day he had a "Hanoi Hilton Nightmare/Flashback" and selected for the Tea Party followers that utterly stupid woman, Sarah Palin.
My God her intelligence was limited, she didn't even know that Hawaii was a state of the USA!!
Colin

That is an interesting quote.

To this day I can't believe that John McCain chose Sarah Palin!