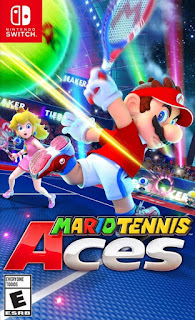 I've been a fan of the Mario Tennis sub-series since the N64 version, though it was predated by a really obscure version for the ill-fated Virtual Boy system. I certainly missed the WiiU sequel Ultra Smash but I heard it failed to really evolve the series. Since I no longer have a WiiU, I guess I'll never know for sure. So how did the Nintendo Switch incarnation hold up after a good hiatus since my days with Power Tennis on the Nintendo Gamecube? 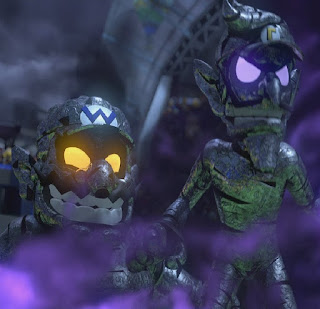 I can't recall if any other earlier games have it, but Mario Tennis Aces has its own story/adventure mode. Basically a very evil-looking (but Mario and Luigi are unsurprisingly clueless) Wario and Waluigi challenge the plumbers to a match. And Luigi gets taken away by some magical curse. Sometimes I blame Mario for all that happens to him. 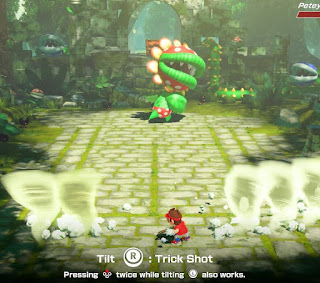 Anyway, the story adventure mode lets you play as Mario and at first shows you how to play the game. What I've noticed that was new were trick shots and power shots. Trick shots involve using the right analog stick and flicking it in the direction of the ball. They're mainly used to save your skin when a tennis ball is far out of reach. Power shots use energy (which you by skill, build up) to whack the tennis ball at such a powerful force that no regular person could really get it. You can also slow down time to even things out. 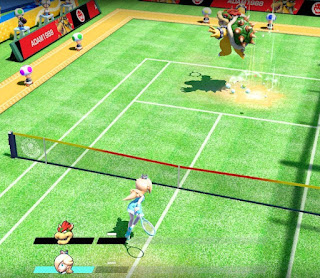 The online multiplayer is very good. You have simple one-on-one matches in a casual mode. Then you have a tournament mode which pits you against other players and only the best survive past the quarter-finals. You can play with the new power modes, or you can play a simpler mode without the fancy moves. I will say that the tournament mode will have a lot of wait times once you rise higher in the ranks, because of the wait time for matches to be over. Tennis games can be either short or long (stalemates draw things out for a LONG time) and I never got to the finals because I didn't want to wait an hour for the next match. 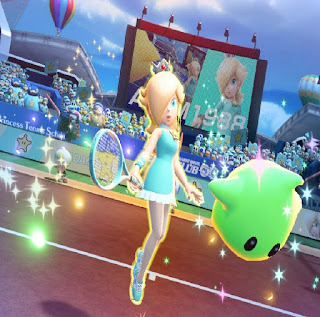 But overall I liked Mario Tennis Aces a lot. The online flows very smoothly while playing a match, I did notice some terrible lag in about two matches, but I suspect it was more on the connection of another player than really Nintendo's in general. The adventure mode I found dumb and boring, and I didn't get far into it honestly (I have similar feelings with Splatoon 2) but the online multiplayer is pretty darn fun. I also like how different all the characters were, I really liked Bowser, Wario, Rosalina, and Chain Chomp. Though I hated Yoshi (I'm sorry my green dinosaur friend) and Bowser Jr. because I could not win a match with either of them. I really hope (and they probably will) Nintendo's Camelot team is working on Mario Golf for Nintendo Switch next.

Playing the actual game would be far more beneficial than sitting on one's bum in front of a computer fiddling away.
Exercise, exercise and exercise young man!
Colin