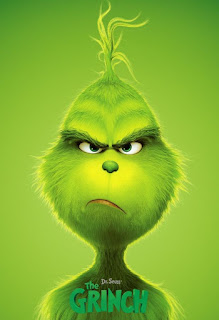 How the Grinch Stole Christmas is my personal favorite work by the incredible Dr. Seuss. The 1966 cartoon version is one of my favorite things to watch during the Christmas season as well. I very well remember the major movie version with Jim Carrey in the year 2000 and I really liked that movie to be honest. It's been almost two decades since then, so Hollywood decided to make a new Grinch movie but this time it would be animated, and with 3D graphics too. My mother was on vacation and she wanted to see a movie with me. It is quite rare for me to watch a movie on the very first day it comes out.

For those who don't know the story (what rock have you people been living under?), The Grinch is the only person in the city of Whoville (though he lives isolated on the mountain above it) who hates Christmas. In this version, The Grinch grew up an orphan who remembered Christmas as a time of sadness and isolation. When he grew up, he wanted nothing to do with the holiday, but can't stay up on the mountain long enough to ignore the Christmas season. 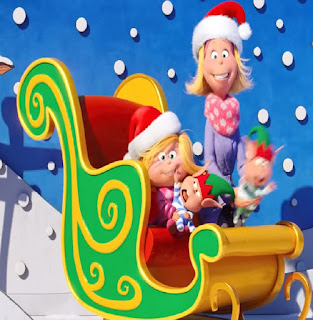 The main human in the story is the little Cindy Lou Who, who loves Christmas. Certainly much more than the mean old Grinch. However unlike most children her age, she doesn't want a nice doll or stuffed animal, but rather something selfless. Her widowed mother Donna Lou Who is tired and overworked and she hopes that Santa Claus will be able to do something about that. 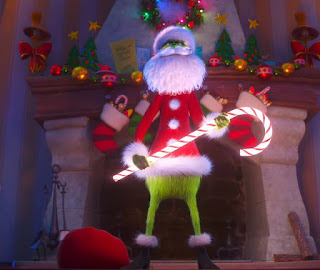 But the only Santa coming to town will be the mean old green menace.  The Grinch has a hole in his heart that needs to be filled. He is utterly convinced that taking Christmas away from the people of Whoville is the only way. And her his poor dog Max has too tag along while his master is up to "evil" plans. 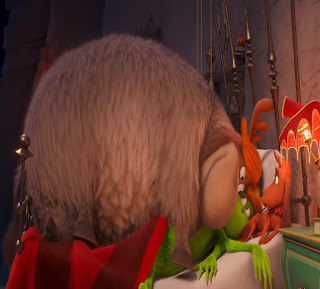 The Grinch movie was good but not great in my opinion. While I love Benedict Cumberbatch, I didn't really like his "Grinch" voice in this incarnation. There are some new characters in this one which I like, such as Fred the fat reindeer and the super-jolly Bricklebaum. In comprasion to the Jim Carrey version, they eliminated much of the Grinch backstory to expand on Cindy Lou Who's story.

Boris Karloff will always be Grinch to me.

Why isn't he blue?

My mom was recently clearing out old stuff from her house and I reclaimed some Dr. Seuss book from my childhood. I prefer the books that start simple and get increasingly surreal and complex as they go on - "If I Ran the Circus," "If I ran the Zoo," "And to Think I saw it on Mulberry Street."

I appreciate the world he creates in his works. Many of the movies from his stuff can't find that world. But I'm always willing to give the films a go. Didn't know this was out.

My favourite will always be the first with the great Boris Karloff as the narrator but I will se this one...probably when it comes on tv. It glad it is ok.

Good Post
Watch This And Upload This Type Of Videos