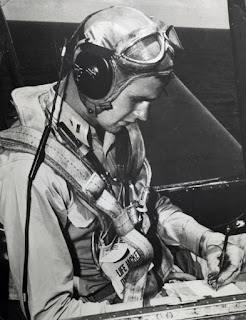 Future president George H.W. Bush served in the U.S. navy during the majority of the American war years during World War II, in the Pacific Theater. He had come close to being KIA as an enemy solider had damaged his plane enough to force Bush to eject himself from the aircraft. He was saved by American Navy sailors before the Japanese could capture him, which was not the case for some of his close comrades that day, whom met grim fates. He left the military shortly after the end of World War II.
Posted by Adam at 2:27 AM

He looks so young!

He answered his country's call, unlike SOME.

He was most fortunate to have been rescued by a US submarine.
The Japanese military beheaded captured Allied airmen.

It is also wonderful to know he never forgot his two crew members who did not survive the crash.
G W Bush can be called a US patriot, the Trump mob of loonies are just money grabbing and incompetent creeps. Get rid of the bastard before he drags the US into disaster.
Colin

He was a 20 year old pilot. One of the US youngest fighter pilots of WW2,
Colin

He served his country!