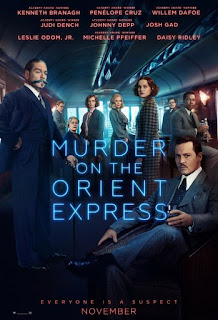 Murder on the Orient Express was a movie I heard about last year, which had very mixed results despite the stellar cast. I didn't know it was based on a novel series by Agatha Christie which had seem quite a few adaptions. The star fictional character of these works was Hercule Poirot,whom is probably unknown to many Millennial and defiantly members of Generation Z. I had probably heard of him, but didn't know much until this movie. But to explain it, he's kind of like a Belgian Sherlock Holmes with a terrible yet brilliant mustache. 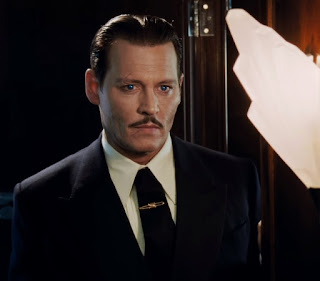 The film begins in 1934, where Hercule Poirot coming in from a victorious of a case in Jerusalem, boards the Orient Express, a very major (and actually real train) way people got around Europe (ironic to the name) back in those days. During the train ride, he is pleaded to by the known criminal Edward Ratchett to protect his life on the train. Why Poirot sympathizes a little, he refuses due to the man's core nature. But Ratchett was right to be paranoid, as he is found to be murdered in the morning. 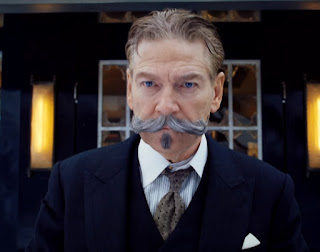 Hercule Poirot decides to take on the case. He (not humbly) considers himself the greatest detective in the world, which is probably true. If anyone in Europe could solve this train crisis, it would be him. He also senses urgency as he wants the the truth uncovered as he figures that the local police would arrest a scapegoat among the "lower class" and call it a day. 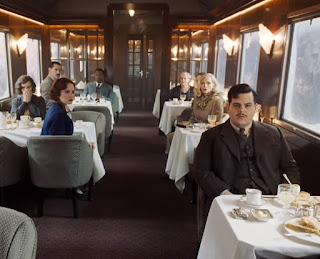 With luck, the train gets stuck in the snowy weather. It would be quite some time before help arrives to get the train moving again. This gives Poirot time, but despite his high skills with figuring out the greatest mysteries, he finds it to be a nearly impossible case to solve. There are only a few select people on the train, but none of them seem to be a killer. Can the truth be uncovered? 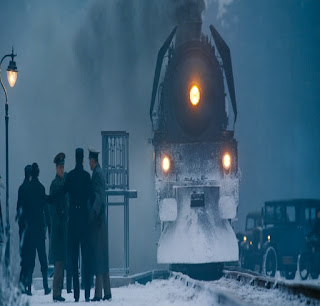 Overall Murder on the Orient Express was a bit better than I expected. While starring and directing had been no stranger to Kenneth Branagh (as he won two Oscars for 1989's Henry V), he certainly makes some mistakes here. I will say, he is quite powerful and memorable as Hercule Poirot, especially towards the final end. But I will say personally, I care very little for all the other characters. It is true that Branagh was limited by the book's story, the film didn't make perfect sense to me until the finale and I guessed the ending correctly.

I really want to see this film. I must've started to watch it twice now but the kids were always around and I couldn't hear the dialogue so had to stop. I think I'll give it a go again over the holidays.:D

I enjoyed this film well enough, but Branagh is not my favourite or definitive Poirot. That would be David Suchet who did the British TV series a few years back.

We loved the 1974 movie with a stellar cast and enjoyed it. This new version takes a different view, with its own stellar cast. We enjoyed them both. Each different but the same.

If you have seen the original for God's sake don't see this disgraceful remake................Adam - it is worth a Z.
it is a travesty of film making.............classics with stellar casts as the original had, should be left alone. Laurel Bacall and the others must be spinning in their graves - well the dead ones of the cast.
Further more - using physics how in bloody hell did those carriages remain on that curved bridge with a toppled over locomotive?????????
The sitting in a tunnel in freezing temperatures to have the verdict explained??????????????????
Depp "of bringing illegal dogs" into Australia fame, is no Richard Widmark.
I won't even go into the carriages and the train supposedly used.
Just see the original.
Colin