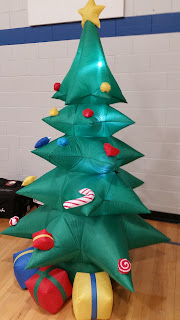 As I mentioned before, I volunteer for Big Brothers Big Sisters. They hold a Christmas party every year about a week and half before Christmas at the local big YMCA. Like last year I had to work, but I managed to trade shifts so I could be there at 4pm. Luckily my Little Brother Mr. B has a sister in the program, so her Big Sister was able to drive them both down there as I wouldn't really have to time to get him after work. 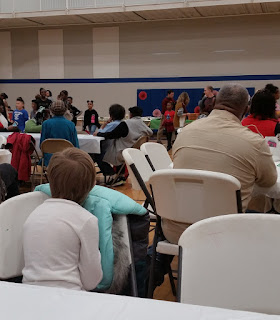 Like last year, there wasn't much to entertain the little ones. They had dancers and some music, but most little kids don't like that, at all. So thinking ahead, I brought my Nintendo Switch (which you can play portable as it's a tablet in design) and Mr. B was so happy I did. I told him he was the coolest kid there because nobody else had the bright idea. 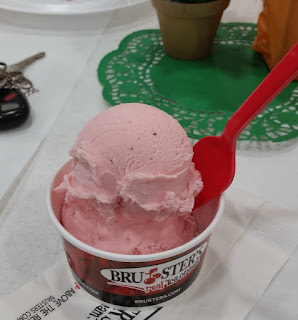 We had a good time. They did feed us, up on the buffet was pizza (my choice), chicken, and a few other options. Unlike last year the only choice of drink was tea... I guess they didn't want the kids hyper, but yet Brusters was there with ice cream. Sugar is sugar... I rarely drink water with meals (but I solely drink it when not eating anything) but we just got a cup of ice and filled it up with water. Both Mr. B and his little sister got a present on their way out.
Posted by Adam at 12:00 PM

I'm so impressed that you're a big brother. That's such an important role to fill.

This is fantastic that you were able to go.

What you do Adam is so important, I'm so pleased you were able to go.

You have such a generous soul. God bless you.

That is really nice. Sounds like a good time.

What a beautiful story, Christine! It brought tears to my eyes. Thanks for sharing the link.

Oh this looks like a nice event darling
xx

Seems it was improved from last year.

Mr. B is a very blessed little man to have you for his Big Brother. Adam, you are doing such an important thing in his little life. There's nothing more important than our little young ones and you are taking on such a good role. Keep it up...it is YOU that is being blessed, too.
Say HEY to Daisy for me.

Glad you though ahead and had something there that would entertain your Little Brother. Nice of them to host a holiday party for everyone too!