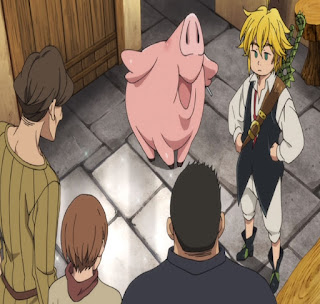 While I consider myself a fan of Japanese anime, I've missed out on a lot of shows that made splashes in popular culture among otakus. One of the reasons why is I mainly rely on Netflix Instant for my TV shows. For a long time, Netflix was horrible for anime but overtime, Netflix grew smart and they acquired what they could. Sony's Funimation is the king of anime in the English-speaking world but Netflix smartly picked up The Seven Deadly Sins as a "Netflix Original" which means it will probably be on there forever. 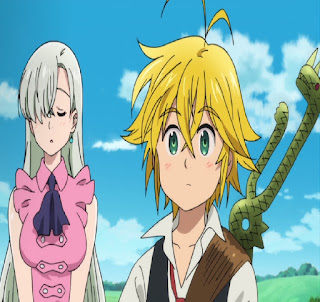 The story starts years after a great war in a fictionalized version of Britannia (England/Wales) where magical people and non-magical beings co-existed. The realm had been at a so-called peace in the Kingdom of Liones thanks to the guardianship of the Holy Knights. The Kingdom's greatest enemies are apparently the renegade Seven Deadly Sins, former Holy Knights who allegedly want to overthrow the kingdom. The youngest princess of the kingdom, Elizabeth runs into a strange "boy" named Meliodas who runs a tavern with a talking pig. Soon "Holy Knights" come to cause trouble between Meliodas and the secret princess. 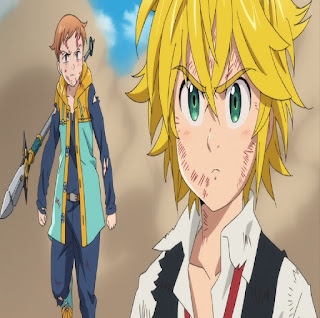 Meliodas turns out to be an ageless warrior and the former captain of the Seven Deadly Sins. Elizabeth soon learns that he's extremely powerful and capable of defeating even the greatest of the Holy Knights with ease and with a broken sword no less. Soon enough Meliodas and Elizabeth search for the former members of the team so they can find out who is really behind the evil events in the Kingdom. 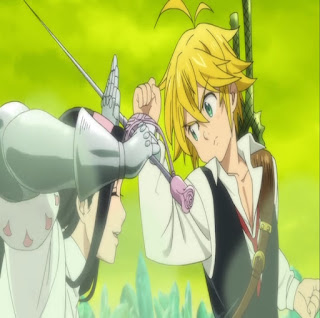 But it won't be easy at times, different kinds of warriors will soon challenge Meliodas and his crew. The captain often feels too care-free and non-serious even when things get super tense all around. However the one that makes him snap back to reality is when Princess Elizabeth gets into danger and he start to become angry. 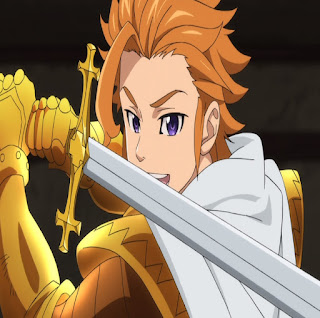 Overall I liked The Seven Deadly Sins' first season and I will watch the next two most likely. It starts out really strong but soon loses its steam after a handful of episodes. Mainly because it becomes apparent that fights often end up with very little results and that even death doesn't seem to be a big deal to the story. But the characters are lovable (Meliodas is hilarious, and Elizabeth is just so sweet and adorable) which helps evens things out.