Fact of the Day: John Brown the Abolitionist 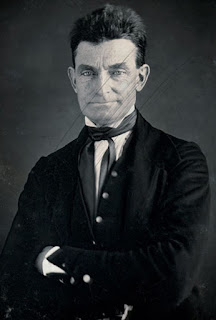 While most American abolitionists were pacifists, John Brown didn't hold the same opinion. John Brown believed only armed insurrection would solve the issue of slavery in America. He led forces often with African-American men as his comrades to some small victories. However after trying to spark a slave liberation movement in Virginia, he was captured by Robert E. Lee and U.S. Marines when no local slaves joined his revolt. While he was hanged for his actions, what he had done he added to the escalation of events that led to the U.S. Civil War which ultimately led to John Brown's main goal.
Posted by Adam at 12:00 AM

Did what had to be done

He was a martyr.

And now his body lies a-moldering in his grave.

He was a bit of a "nutter".
Anyhow we did get a song due to his "revolt/mutiny".
Colin

I'd never heard of him.

"John Brown's Body", the song Debra quotes from, kind of a rallying sign for pro-abolitionist Union troops (not that they all were; some just wanted to keep the Union together) during the Civil War.