Favorite Quotes: The Symbol of America Should Not Be a Wall 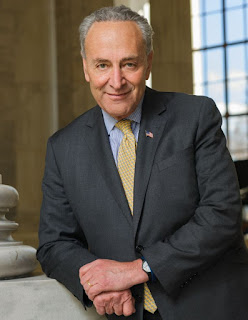 "The symbol of America should be the Statue of Liberty, not a thirty-foot wall."

Chuck Schumer (U.S. Senator and Senate Minority Leader) has done a decent job standing up to Trump and his GOP cronies. This border wall is a ridiculous idea. It's expensive (way more than what Trump is asking, by the way), easily sawed through, and just puts society (didn't we hate the Berlin Wall?) backward. People often think of America and the Statue of LIBERTY with such respect. If American becomes synonymous for a wall of lies, politics, and racism, Lady Columbia and Uncle Sam will shed more than a few years.
Posted by Adam at 11:00 PM

Very true, Adam. And just a little off topic: your comment on my blog today -- "Purrasic Park" -- brilliant!

He’s alienating our allies and being buddies with our adversaries. It’s really scary what’s happening now. The wall might prevent those who are really in trouble and need asylum. Drug dealers and what not will get through as they’ve always done.

Kay's right. It will just keep out the decent people.

Under two years to go!

I well remember the Berlin Wall going up and coming down. We don't need a huge, expensive wall. There are much better ways of handling border security. I'm afraid that America's reputation is badly tarnished and others are regarding Americans with dismay and disgust. I have no idea how long it will take America to recover the trust and respect of its allies around the world.

"Ich bin ein Berliner" (JFK) and Ronald Reagan - "Tear down this wall, Mr. Gorbachev" - must be spinning in their graves!

"Stopping drug dealers" - maybe Turnip Top should look under a few beds of the criminals in the USA!
This lunatic you have is the laughing stock of the world! How decent American citizens can face the World as travellers is beyond me.
Thankfully here in Australia there are no RED HATS OF "MAKE AMERICA GREAT AGAIN". They would be ripped off the wearer and stuffed up their arse!
Kay above has nailed this well and truly. Using a typical Aussie slang expression - "GOOD-ON-YA" Kay.
Colin

Sadly, I know you are right, Huggybear!