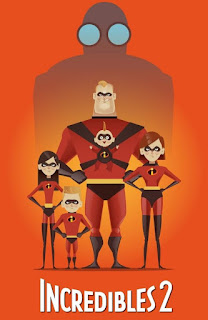 I remember watching the Incredibles during my last semester of high school back in 2006, back when the film was fairly new. It took FOREVER for the sequel to emerge, and I can recall a lot of fans begging Disney and Pixar to make this one appear out of a magic hat. I was tempted to see it in theaters, but things never came to be on that one. 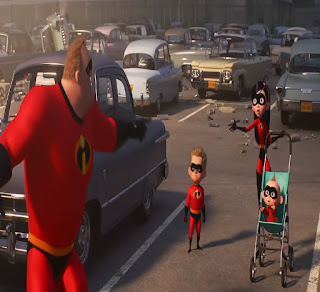 The movie starts not long after the events of the first film. The superhero family of the Parrs decide to tackle down a great new villain who is causing all sorts of destruction. Like always, they emerge victorious, but it doesn't go smoothly. For one Violet's new crush saw her in costume and with a fallen mask, and the government wasn't too happy that there were a few unpleasant accidents and forbids the family from crime-fighting again. 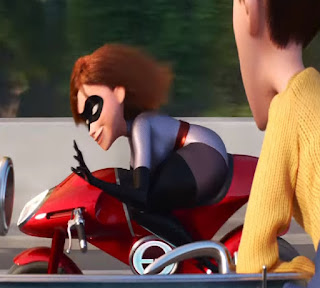 A man named Winston Deavor hires the mother of the family, Helen Parr to take up her old moniker of Elastigirl again. Winston's father loved superheroes, but when the government told them to hang up their capes, his father was murdered by thugs. He believes Helen can do good in the public eye by saving people from accidents and cause superheroes to become an accepted thing once again like the good old days. 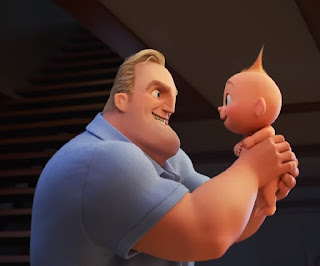 Which leaves the family's dad Bob Parr to raising the kids. Violet is pretty steamed that her dad ruined her chances with her would-be boyfriend. Dash's homework pile is really starting to overwhelm the tiring father. And Bob soon learns that Jack-Jack has more powers than all the heroes he knows combined. But a new evil force will call all superheroes to fight, but will they emerge as the victors? 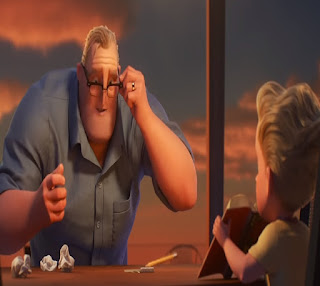 Overall I was a little disappointed by the Incredibles 2. The plot doesn't seem entirely organic, as if they just made it because some fans (cough cough) forced Pixar to do so. It's a good movie, but the plot is predictable and plays it too safe most of the time. Though it's certainly not one of Pixar's worst films, but not really their best either. I would say the original film was better, without a doubt on that one.

I remember this, anyway the twins loved in this time whe they saw!

So, it met the cry for #2, in general it failed to meet to quality of the first one.

There was not enough EDNA MODE in the sequel for my taste. She's my favourite character.

I never understood the hype of The Incredibles. I did, however, take my daughter to see this one and would give it a B rating as well.

It was basically the recycled plot of the first except far more meh.

We finally saw this movie last month. Although I've already forgot the plot, I did enjoy it. Predictable, but that was okay.

I don;t know anything about this movie...
Hope you and Daisy are off to a great start on the new year.

I haven't seen the Incredibles movies, Adam ~ but then I've missed a lot of movies. I enjoy your pleasure in viewing and vetting them. Have a good one!

I watched this film and it was good.
But too much predictable for me too
xx