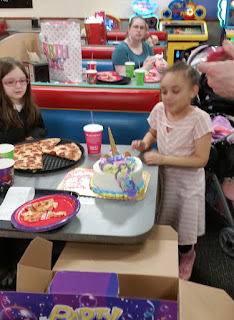 My oldest niece, Little Iz turned 6th right before the New Year, but they didn't have her party until about a week later on a Friday. So she had cake and pizza at Chuck E. Cheese. 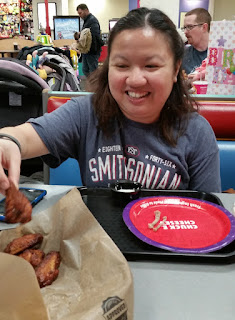 Daisy had herself some chicken wings. I didn't eat at the party, wasn't hungry enough to give that greedy rat enough for his ironically good pizza. 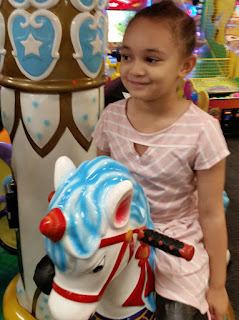 One of their favorite games there was the Merry-go-round ride. 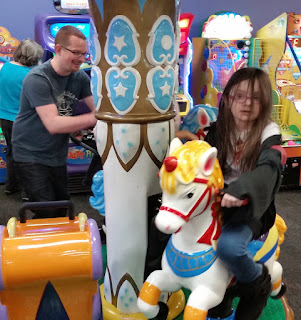 Which my other niece Little K loves as well. 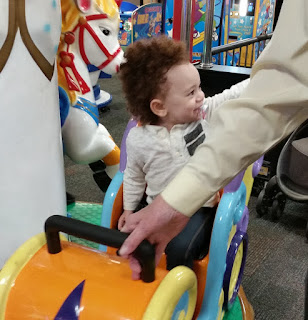 My 2nd youngest niece Little R is starting to get big enough to realize all the fun that is going around her. But the carousel is one of the few things she can mentally and psychically handle. Next year, she'll be running all over place. 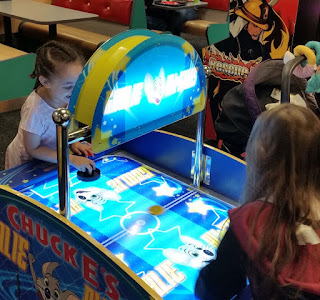 Little Iz and Little K decided to play air hockey on a mini-table. Little K won, and Little Iz is not a good loser. She kept shouting "you cheated!" at her cousin. Her father (my brother) isn't much better, I've seen him say some pretty awful things at other people while online with his PS3.
Posted by Adam at 12:00 PM

What a nice family you have.

Perfect place for birthdays! Have been there several times with gr-daughters. Won lots of tickets.

I remember those from my kids' birthdays, and will be happy if I never have to return. The kids love them, but it's too loud for me (says the guy who loves loud music)!

It looks like she had a very wonderful birthday! :)

Happy Birthday to your little Iz. She is really growing up fast. xo Diana

Belated birthday wishes to Little Iz! All the kids are growing up so fast.

Happy birthday Little Iz. They do have good pizza there, but not good enough to put up with the headache I always end up leaving with.

Little Iz looks like she is having fun! That's quite a birthday cake. Thanks for sharing, Adam!

Happy Birthday to your niece!
Chuck E Cheese has been around forever!

Such adorable kids. They grow up so fast.