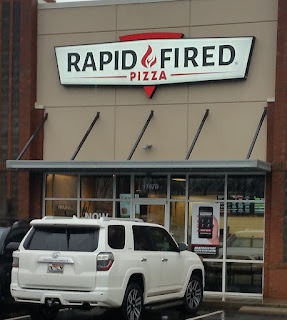 Saw this being built/renovated months ago. It used to be Yogurt King, which served frozen yogurt, but we never went there. I really like pizza so I was curious about trying some. 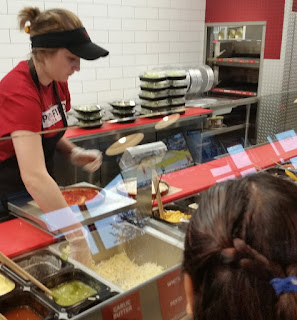 They make your pizza rather custom to your tastes. You can choose sauce type, cheese, and plenty of toppings you can see. Think Subway meets pizza and you'll have the idea. Apparently the pizzas cook in just 180 seconds. 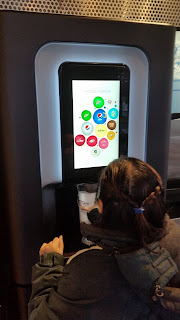 Which is enough time to get some drinks. While it apparently takes that long to cook, they weren't ready until about five minutes later. This was the first time I saw the Pepsi Spire machine which competes with the Coca-Cola Freestyle machines. 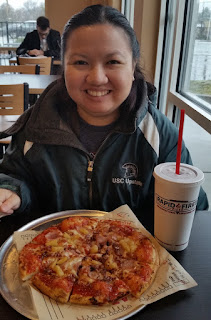 Daisy  got the Hawaiian pizza, one of the few times I let her get whatever toppings she desired. 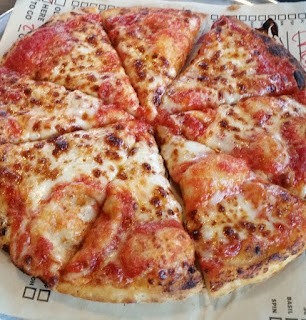 I had a simple cheese pizza. Our pizzas were made in a pan style (I do believe they have thin crust as well) and it was good, but nothing terribly great either. It's way better hot, I had a unusually "full" stomach during lunch so I waited a while to eat the last two or three slices. It starts to lose its appeal (to me) when it starts to lose that original heat. Daisy loved hers though.
Posted by Adam at 12:00 PM

Even bad pizza is better than no pizza.

It does look good. I would choose cheese pizza, too.

This morning I was glancing through the pizza ads. Now that I've read your post, we're most likely to eat pizza for our next meal. The Husband will like that.

An excellent marketing approach! I'd go for the thin crust.

It sure looks good.

Yum! We have a place like that here and it's so fun!

It looks ok.
Always smiling is Daisy :)
Not that fond of Pizza's, seems I only like the ones a private operator makes not far from us..they are beautiful.

We have one called Blaze Pizza here and it is so good. I like being able to have my own personal pizza made just for me in a matter of minutes.

I love pizza, Adam. But I can't indulge in eating it as much as I'd like. Hawaiian is one of my favorites! As always, I love Daisy's smile! Take care you two!