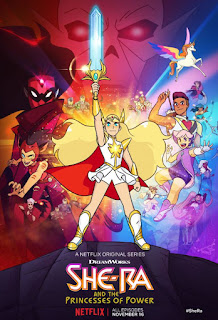 Netflix never fails to surprise me every now and then. While they make nearly countless "Original Series", they seemed to really want to make sure everyone knew that She-Ra and the Princesses of Power was coming. I didn't quite watch the old She-Ra from the 1980's, as it was a bit before my time. I did watch a little of He-Man, who is the twin-brother of Adora who transforms into She-Ra when she gets her magical sword. I was originally going to ignore the series, but for the bits and pieces Netflix was feeding me, I was curious about it. I also heard they add some subtle LGBT characters, which is rather "brave" for a show crafted mostly for a younger crowd. 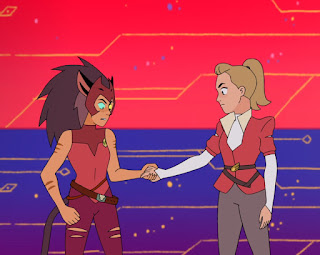 The story starts off with Adora, a cadet in the Horde, a military legion that she has been raised in since shortly after her own birth. She has no family that she knows of, but she was groomed by a sorceress named Shadow Weaver to be the regime's greatest champion. Her best friend is Catra, who secretly considers herself to be Adora's inferior and is kind of bitter about it. On their first real mission, Adora finds a magical sword that calls out to her. When she says the right words, it transforms her into She-Ra, a Princess of Power. 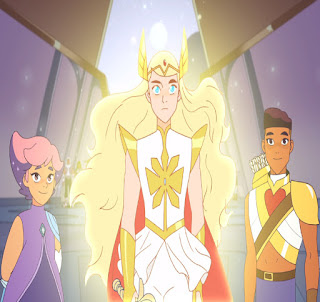 Shortly later, she realizes that it is the Horde, and not the Princess Rebellion that are the evil ones. She begs Catra to join her, but her feline-humanoid pal stays in the regime. Adora is then befriended by Princess Glimmer and her best-friend (and archer master) Bow. As She-Ra, Adora pledges her allegiance to the Princess Alliance, which is a big statement when they find out she was until very recently, a Horde officer. 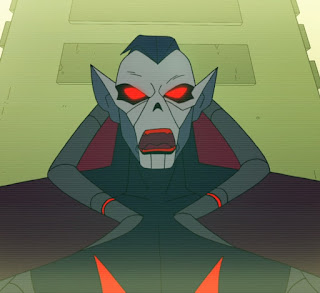 Mostly behind the scenes on the side of evil is Lord Hordak. While we don't get to see much of his power, his might is strong enough to make the powerful witch Shadow Weaver to cower in fear. He originally takes Adora leaving without much of a care. But he will soon realize that will be a grave mistake on his part. The forces of good and evil will soon clash in a mighty war. 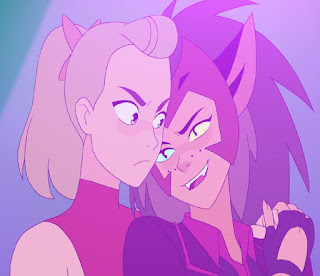 Overall She-Ra and the Princesses of Power is a tiny bit worse than what I expected. It's colorful, smart, and has its very clever moments. Many characters from the 1980's are rather cheesy with the nostalgia glasses off, but they did a good job modernizing it and making the characters more detailed and unique. Though because it does expect 70% of its viewer or more to be kids, all the violence and destruction in the episodes don't have many long-lasting consequences. But I would not be shocked in the slightest if He-Man gets remade in the same fashion by Dreamworks and Netflix. I would like to see the shows cross-over as well as I heard happened in the original cartoons.

I guess I've got my nostalgia glasses on tight because I hate the look of the new She-rah. I was nuts for the show back in the 80's, so this one just looks all wrong to me.