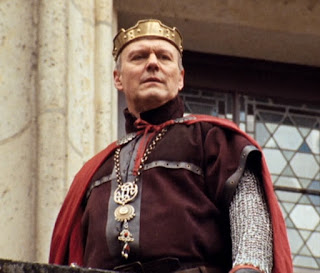 I knew the character of Uther Pendragon decently well before starting Merlin. His love the Lady Ygraine is a big party of the early story and the reason Arthur was even born. In this incarnation, he REALLY REALLY REALLY hates magic. So much that all magic users in Camelot are put to death. Which grants him many enemies. 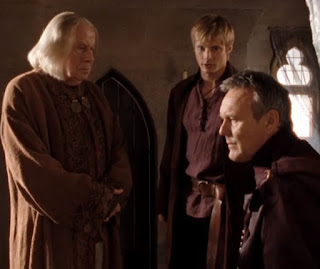 Which is ironic since he still takes advice from Gaius, whom he knows was a magic user and kind of sort of relies on him to pretend not to use magic when he wants something. Uther also isn't' a very good father to his son. 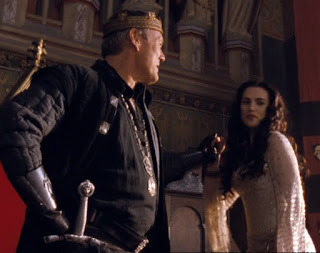 Nor to this "ward" Morgana, who turns out to be his secret daughter, who soon knows she can use magic. Well that's ironic. Typically Morgana/Morgan Le Fay is Arthur's half-sibling from his mom, not his dad. But I suppose the show wanted to trick some people with the old curve-ball. 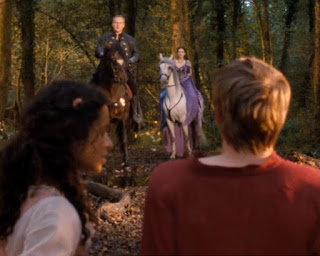 Since Guinevere is a servant girl in this version, Uther eventually finds out and tries to drive the two apart. Doesn't work except in the very short-term. Though the two lovebirds can't do much until Uther is dead. 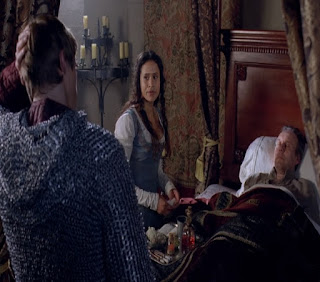 Which happens close to the series being over. I thought Uther would be dead as a doorknob by the final episode of season 2 but boy was I wrong. I hated his stubbornness the most, and I was so happy when Arthur finally became King instead.
Posted by Adam at 11:30 PM