Fact of the Day: Battle of the Bulge 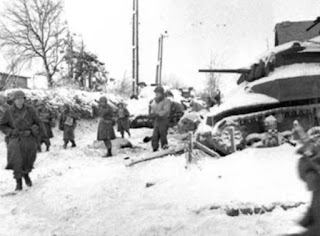 The Battle of the Bulge was one of the last major battles in Europe during World War II. The Germans wanted to use the last of their men to destroy most of the American/British armies and force the Allies to sign a peace treaty. While America saw many deaths during the battle (partly due to over-confidence), it was eventually an Allied Victory with Germany's western forces essentially crippled to the point of no return and made it easier for the Soviets to invade from the east.
Posted by Adam at 12:00 AM

Good how it led, even though war is awful.

I don't remember reading about this battle in our history classes. Interesting. For a moment, I thought it was about a diet!

This was a terrible battle, now named descriptively for our troupes caught in a weak place in their lines and squeezed in the bulge of the opposing troupes. We owe gratitude to those thin and starving and freezing cold soldiers who held their line.

It was bad. I remember learning about this in school.

I believe that was the battle that when an Allied commander was asked to surrender, he plied "nuts!"

That really was the name of a real battle?

It really was. They called it that because the Germans punched a "bulge" in the Allied lines. The fact that I know that...nerd...strong in me, it is. LOL

Over-confidence. I'll buy that. The Germans were certainly on the ropes. But, to draw a corollary to the animal kingdom...a wounded animal is still very, very dangerous.

It was. It was the response of the American commander during the Battle of Bastogne.
Oh...my...goodness...that I know that.

And, in most cases, completely unnecessary. My favorite ('favorite" being a dreadfully poor choice of words) example of the futility of war is World War I (what I refer to as "The Great Penis Measuring War").

Such a terrible war.

There is a reasonably good movie of this battle and aptly
named "The Battle of the Bulge' - excellent casting.

The German C-in-C, Generalfeldmarshall Gerd Von Rundstedt thought
it was a hairbrained Hitler and his lackeys dream....and a fanciful dream
only. It was to cut the lines between Montgomery and Patton and
get to Antwerp.
Von Rundstedt was right!
Utter slaughter of German and Allied troops for nothing!
Colin

I hate war, but I recognize that sometimes people cannot avoid it.