Fact of the Day: Buddhist Josaphat 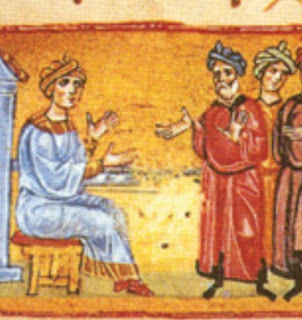 A Christian tale of "saints" and "martyrs" named Barlaam and Josaphat had been around since the early days of the Christian churches. In the story Josaphat was the son of a king in India, and the king persecuted Christians. A teacher named Barlaam converts Josaphat and the King eventually becomes Christian too. Prince Josaphat becomes king but later leaves the throne for religious reasons. Many historians believe this fable was heavily based on the story of Buddha.
Posted by Adam at 12:00 AM

Email ThisBlogThis!Share to TwitterShare to FacebookShare to Pinterest
Labels: Buddhism, Christianity, fact of the day, India

Guess some sliver of truth in many a fable

Is "Josaphat" the same as "Jehosaphat," as in "Jumping Jehosaphat"? Curious minds wonder.

First time I hear this. Interesting.

Apparently that was on a ancient Jewish King, rather than this guy.

I'm always curious about the truth behind myths and legends. I hadn't heard this story before.

Since India is in no way a Christian country, this royal convert (unlike Constantine of Rome) didn't seem to have much influence over his subjects. But maybe he was a pluralist as well as a Christian, and that's a good thing.