Fact of the Day: Civil War in the Spanish Civil War 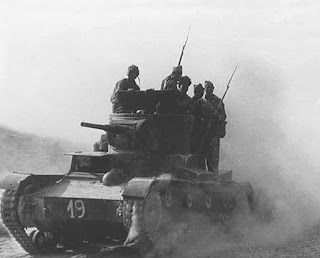 While the Spanish Civil War was fought by the Republicans (mostly left-wing) vs the Nationalists (mostly right wing), the Nationalists united firmly behind Francisco Franco. A major reason the Republicans lost the war was because of internal infighting. Sides of anarchists, communists, Anti-Stalin Marxists, and a few others often fought against each other, either politically or violently.
Posted by Adam at 12:00 AM

It was the big left-wing cause of the day then.

Interesting, we can always learn from history. No infighting.

Back then, Americans on the Left saw it as forerunner to the War on Fascism. Take down Franco and you take down Hitler, so the thinking went.

We fight them one at a time. Nothing learned.

I'm only now starting to understand what that war was all about. It's interesting how many American went over there to fight in it.

History is always interesting. And there are lessons there to be learned.

A prelude for practice for WW2.
Sad times indeed.
Colin