Fact of the Day: Sophie Scholl 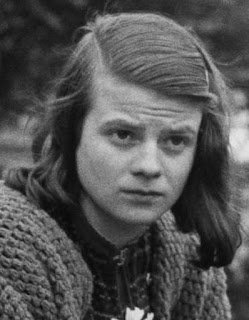 During World War II, Sophie Scholl along with other students of the University of Munich led a non-violent and intellectual movement called the White Rose group. She became a vocal critic of the Nazi regime and often used leaflets to spread her message of resistance. The Nazi had her arrested and executed her by guillotine.
Posted by Adam at 12:00 AM

I hadn't heard of her. Glad there are brave people who try to make the world a better place.

I remember seeing a foreign (German?) movie about her and her group many, many years ago called "The White Rose." I think there may be a new movie about her too that's just come out.

Oh, how awful. What a brave young woman she was.

Good God - so many having not heard of this heroine of the German people during that black time of history.
There are boulevards etc named after her and a statue of her, I think in her home city - Berlin.
Colin
Colin

Thank you for sharing this, Adam! I have read so much about this time period, but I never heard of Sophie Scholl. I just finished reading a little about her, and her story gave me the chills. What a courageous and principled person, and to die so young. She is truly a heroine.

The Statue of Sophie is in Munich. She was guillotined.
The executioner was the official for this job and after the war advised the authorities in Nuremberg on the hanging procedures of the War Criminals. Quite an interesting character also.
Colin