Fact of the Day: Walter Model 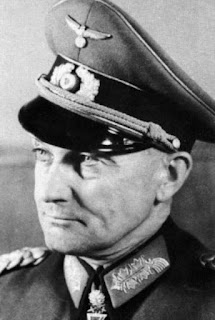 While most historians considered Walter Model as German's greatest commander of defensive strategy during World War II, he was not popular among his troops. He said many foul things, was abusive, micro-managed his people plenty of times, and often ignored basic rules and policies when it suited him. When he was first promoted to a high-ranking status in the military, virtually everyone of merit under him asked to be transferred.
Posted by Adam at 12:00 AM

My boss is a micro-manager and we all hate it too!!

I had never heard about him, but it doesn't sound like I was missing out on anything good. Thank you for stopping by my blog, and leaving me a kind comment :)

Wow when so many are asking to be transferred that should tell you something.

Sounds like he was tailor-made to be a Nazi.

Adolf liked him - he was the FUHRER"S FIREMAN.
Not a member of the aristocracy of Prussia so not liked,
really detested, by the Officer Corp.
Staff when he was sent to an Army Group tried as hard as hell to be removed - he had a foul mouth. Some things said about him by staff officers after the war are quite amazing - bordering on really the unbelievable!!! He was a BASTARD.

Somehow he DID contradict his Fuhrer on military tactics and got away with it.
He committed suicide when completely surrounded in the Ruhr pocket.
He certainly would have been in the stand at Nuremberg with Keitel and Jodl and hung just like those two lackeys of High Command Supreme Headquarters.

It is true that he was a clever defensive tactics commander but he never considered the casualties as any concern!
Colin

WWII and the Nazis seem so far away now. So much has happened since. Suicide seems like an easy way out.

For him it was - the Russians had him on the top of their list for war crimes on the Eastern Front.
Colin