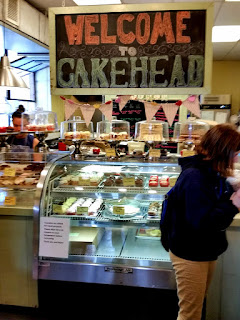 Cakehead Bakeshop is a little tiny bakery in downtown Spartanburg inside the same building as a coffee place called Little River Coffee Bar. While downtown with my mother, we stepped in as she wanted a few things there. 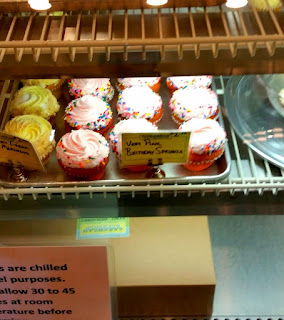 There's not much selection because of the bakery's tiny space (hard to blame them there) but I got one of these pink cupcakes. We were about to eat lunch, so we saved the desserts for later, but I think they dried up too much in the car. Wasn't as tasty as I was expecting.
Posted by Adam at 12:00 PM

Mmm cake, sorry to hear it was dry.

Interesting name for a bakery.

Have been to luscious cupcake places, take them home immediately, and they are still dry. I believe that is because the cakes are baked a few days in advance, frosted, and displayed. they aren't fresh. Sad.

Well, the pink ones sure looks good.

As an experienced cake head, I can tell you a slice of cake would been the better choice. All the cake goodness is surrounded by mounds and gobs and goos of BUTTER iceing. Nothing can go wrong! A word of advice to a novice.

Bummer that it wasn't as good as you hoped!

That is always disappointing when you have your mouth set for a taste treat and it turns out to be a let-down. Have a great week, Adam. Diana

Sorry to hear it wasn't as good as you hoped. Little bakeries here usually have the best baked goods. It's the bigger chains that usually taste dry and old.

Cupcakes can be surprisingly bland. They are not my faves at the best of times.

They do look good though.