So I Got to Meet Senator Elizabeth Warren 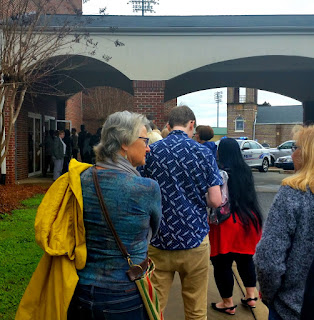 Yesterday Senator Elizabeth Warren was in Greenville, SC for a campaign rally for the 2020 Presidential Election. Both her and Kamala Harris have done pretty well early on, but it could be anyone's race. Though I do think Warren is statistically likely to win at this point in time, and certainly in the general. Once a candidate has the nomination, the chances of meeting them from less than 50 feet away is slim to none. I knew I'd never meet Obama (a fact that hits me right in the heart) but I knew not to miss this chance. I drove about 45 minutes to Greenville and walked to the West End Community Center. Though I was 50 minutes early, the crowd was already large when I got there. 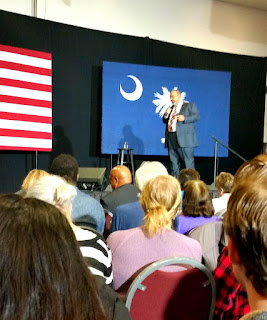 We waited about an hour for the event to start. After some local politicians/leaders got to speak it was time for the real deal. 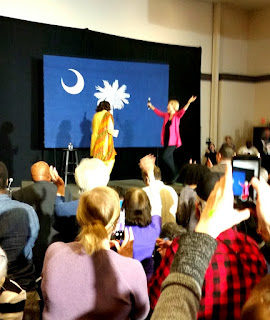 The crowd was pretty excited when she came out, obviously. 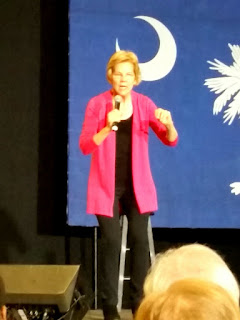 She's a great public speaker, often causing many claps from the crowd. While most politicians have to speak with the "proper wording", some of her true words slipped out. She mentioned that what motivates her the most in this fight is seeing Donald Trump sworn in as president. 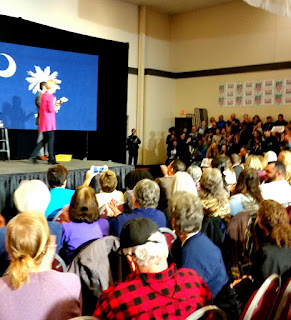 About ten people got to ask questions for Senator Warren before time ran out. There was a local Democrat who "moderated" the thing, and Warren had to be reminded that she was speaking for too long. But that's good, that helps prove she's passionate about what she's talking about. 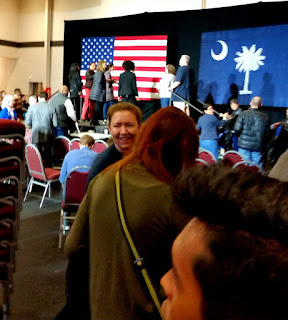 With almost a thousand people in the room, Warren surprised me by vowing she'd stay until everyone had the chance to get a picture. I dumbly sat on the wrong side of the room on the left, and the line started on the right. It took almost an hour for the whole thing to be wrapped up. Pretty crazy considering that she only was able to spend less than just a moment with each person for the most part. 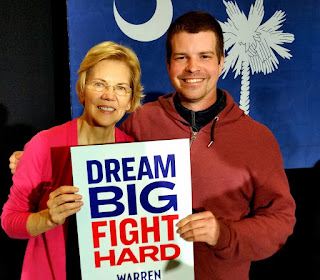 But yeah I got to meet her just for a brief moment. I wasn't quite sure if she was going to go for the handshake or the hug, but she motioned for the hug as I walked to her. If she does become president, this photo is going to become even cooler than it stands now. As I gave the next person the chance to meet her, she said "Keep on fighting!"
Posted by Adam at 12:00 PM

That's really cool. It will still be cool if she never becomes President but just imagine if she does.

Granted, that won't be only good thing about her becoming President, but still.

So cool, Adam! And what a great photo!

That is awesome! And such a great photo.

Exciting! And what a great photo!

Love it when someone's true words slip out. Great pic, too.

Very interesting, and although I'm not a huge fan I'd certainly prefer her to Trump. I got to see Obama speak at an Air Force Academy graduation, he shook my nephew's hand as he graduated.

I sure hope people comes out and vote, important to our democracy.
Coffee is on

How cool, Adam! Love the photo! And kudos to you for making the effort to see EW. I worry about the Democratic Party moving too far left. I'd like to see John Hickenlooper, Colorado's former governor, enter the race; but I'm not sure he has the national name recognition to get the nomination. I'd also like to see Joe Biden run. EW is my favorite among the current candidates. Certainly I'll be following it all.

I didn't meet Obama, but I did see him up close when he came to speak at a convention I attended in Washington. Saw Hillary and some others too. It's always exciting to meet a candidate for office whether at the municipal, state, or national level.

A great photo...so glad you got it. As you might guess, she is NOT my choice for POTUS.....

Great photo Adam and well done. I hope your dream comes to reality.
No one in the world can be so despised as Turnip Top and his lackeys.
Cheers
Colin

While she's not my favorite Democratic candidate, I think it's cool you got the photo opp. Two years ago, when Mayor Pete Buttigieg awarded my daughter as his pick for South Bend's student of the year, she was thrilled to get a snap with him. I had to encourage my younger daughter to get one too by saying "You're going to regret it if you don't. That man is going to be president some day." While I don't think this is his year, I do hope he gets far in the race. He's been a decent leader for South Bend, and an overall genuinely nice man.

Oh my gosh! Oh my gosh! This is the coolest thing! I have always admired Elizabeth Warren. I would love it if she won. I really would, but the conservatives would fight hard against her. I’m keeping my fingers crossed though. It’s so awesome that you got that fabulous photo with her. You did frame it and hang it up, right?

In the process of getting that done.

All right, Adam! I like knowing that Sen. Warren talked too long and that she hung out to take photos with everyone who wanted one.