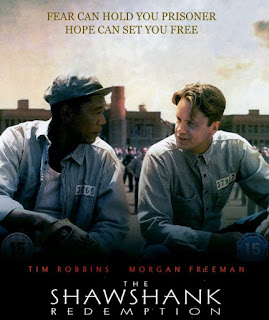 While I've never really read his books, I do consider myself a fan of Stephen King, who often gets at least solid adaptations of his works made into movies. I missed The Shawshank Redemption back in the 1990's because I was just a kid. I saw Green Mile a few years after it came out. I'm guessing this movie inspired King to make the Green Mile story (as both are set in prisons) as the book came out in 1996, as King was obviously not done with the non-horror theme set in an American prison. The only thing I knew about the movie besides King, is that Morgan Freeman was in the movie. 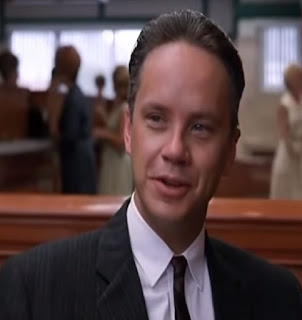 The story starts out with Andy Dufresne, an "honest" banker who is married. We then quickly see him in a criminal court. His wife was cheating on him with another man, and both his wife and her lover were found shot. Andy had evidence all around the scene, but he claims his innocence without much of a defense besides the "I didn't do it!" line. The jury like most, are convinced that Andy is guilty and send him away. 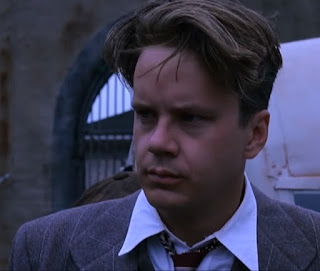 While not put on death row, Andy is sent for a long stay at a rather grim prison. He is not given a warm welcome, like most, and he suffers greatly in many ways. Almost anything you could name happens to Andy, but Andy uses his intelligence to win the favor of the guards and the warden to help him out. 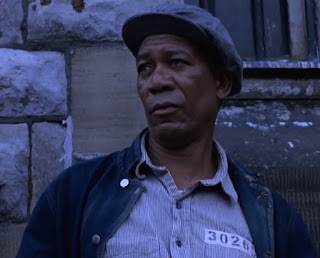 Andy is watched the most by Ellis Boyd 'Red' Redding, an inmate who's been there for longer than he cares to remember. He is the only person there to admit his crime honestly (instead of dumbly claiming their innocent) which was murder. He doesn't know why exactly, but he knows Andy is more than meets the eye. 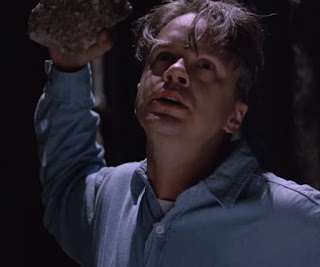 Overall I really liked Shawshank Redemption and it's aged pretty well for something that was about twenty-five years ago. It's certainly (like The Green Mile) not a horror or semi-scary movie. But it does show that an author has more up his sleeve than one limited genre. Though on the subject of The Green Mile, I do prefer that movie in almost every way to Shawshank Redemption.

This has been on my "to see" list for simply ages. I really must watch it some time when it's on TV again.

This is one of our favourite films …

One of the few movies that was as good as the book!

I don't recall why or how, but I saw the film and know that I processed it well. Then the red bus accident, and I recall nothing about the film. Nothing. I do know I'd rather not see it again, but would.

The novella on which it was based is "Rita Hayworth and the Shawshank Redemption" and it can be found in King's four novella collection Different Seasons, which came out in the early '80s.

A film of sheer excellence. Incredible how some people HIDE behind a bible and can be so corrupt, eh??????????
Pretty miserable score, Adam.
Colin

With all the movies I see, it's hard for most to get to the A range.

Agreed. I thought it was a well done movie and Freeman and Robbins do an amazing job. I admire Stephen King so much.

It was a very good movie, with strong actors. Loved the twist at the end.

The Green Mile was excellent. Even tho I have seen it many times, I still cry.

This is a favourite in our household. We've actually watched it a few times.

One of my all time favourite films and was robbed at the Oscars. Forrest Gump should never have won nor Tom Hanks since Tim Robbins excelled in his role as Andy. I think this is superlative to The Green Mile even though, that too, is a great movie, but this is a great film.

I've never read the book, but I've seen the movie several times, and loved the ending. Stephen King has to be one of the most talented writers around, and even now, he still knows how to grab the attention of his audience. Thanks for the great review! Hugs...RO

I don't care how many times I've seen this one, as soon as I see it's playing on tv, I have to stop and watch it. One of the few movies I will watch time and time again. I'd give it an A rating for sure.