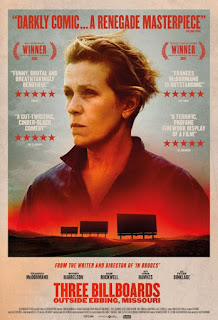 During last year's Oscar picks for Best Picture, Three Billboards Outside Ebbing, Missouri appealed to me the least based on what I saw from just a little bit. I've seen the majority of films nominated for Best Picture last year, including the eventual winner The Shape of Water. I wasn't too pleased with most of those films (most were good, but not in the realm of excellent, in my opinion besides The Post) but I figured I'd give this one a try. Especially considering Frances McDormand beat Saoirse Ronan in the Best Actress category. 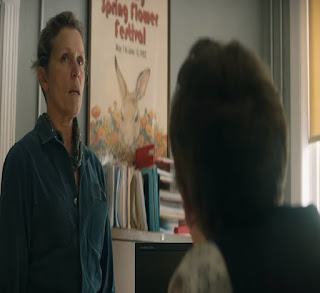 The movie is set after grim events in a small town in Missouri. A young woman named Angela Hayes was murdered and brutally attacked in many ways before she died. While the police had done a standard quo investigation, there was no matching DNA evidence found nor was there any eye-witnesses to the event. Angela's mother Mildred Hayes has become severely bitter over the months and the lack of justice. So uses all the spare resources she has to put a message out that everyone in town can see when they ride down the road. 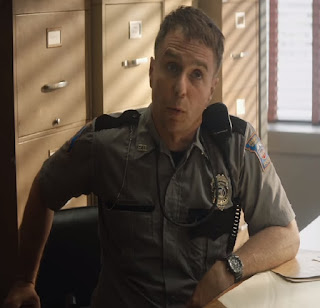 And that message calls out the local police department for failing to solve the case, and basically putting it away for quite some time. This greatly angers Jason Dixon, a police officer with a deep loyalty to his boss and his fellow policemen. Jason Dixon is pretty racist and has great problems with alcohol. And he often tries to thwart Mildred's plans. 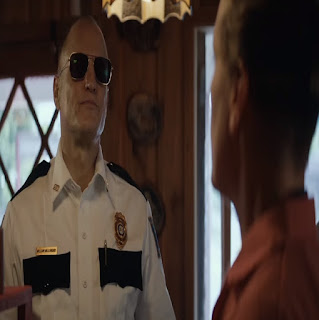 The most sympathetic officer (and surprisingly too) to her plight, is William 'Bill' Willoughby, the Chief of Police in the town. While he has a heart-to-heart personal chat with Mildred, he soon realizes he can't change her mind. Nor does she break from her resolve when he tells her that he's dying of cancer and his days are running short. Will anyone see true justice? 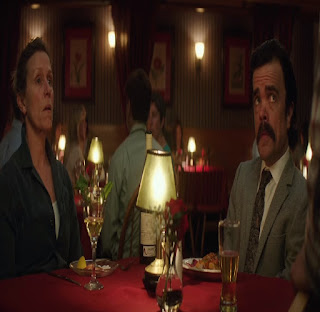 Overall I really enjoyed Three Billboards Outside Ebbing, Missouri. I can really see why Frances McDormand and Sam Rockwell (though Woody Harrelson does amazing here as well) got their Oscar awards. You know acting is really good when you have a movie with Peter Dinklage as an actor, and his performance is extremely overshadowed by multiple people. I liked it more than The Shape of Water, but just a tiny bit less than The Post. The only thing I disliked was the ending, which I felt was anti-climatic.

I never watch the Oscar's and I haven't seen this movie.

We really enjoyed this movie too. All the characters are three-dimensional with both good points and deep flaws. The movie poses difficult question to which it does not provide easy or simplistic answers. The movie ends like Life itself. Who knows what's coming next?

I also loved this and felt the same way about the ending.

I've thought about watching this movie, but have passed it over because I wanted to see something happier. However your review has reminded me that I need to see it. Hope it's still free on cable ~ LOL

I like Francis McDormand so I may give this a look.

I haven't seen this movie, but heard from friend who watched it that the acting and story were great.
I liked The Post too.