Fact of the Day: Battle of Pelusium Cats 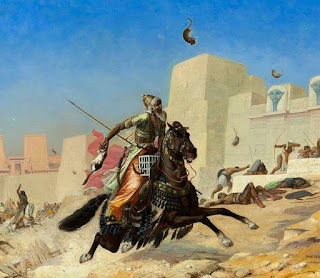 In the year 525 BCE, the First Persian Empire successfully annexed Egypt. During the pivotal Battle of Pelusium, the Persians won the battle (apparently) with the help of cats. They used cats as shields, which Egyptians considered holy and they refused to harm the felines. Giving the Persians a quite considerable advantage in battle.
Posted by Adam at 12:00 AM

Email ThisBlogThis!Share to TwitterShare to FacebookShare to Pinterest
Labels: egypt, fact of the day, iran

I haven't heard this story. Thanks for telling us.

Never heard that one.

A battle of the cats.

Is this for real?!? That's pretty funny:D

WOW! I would never have believed that. xo Diana

I had no idea. What a way to fight though.

That's quite a tale! Those were bloody and cruel times.

Okay, I am just creeped out right now. Egyptians must have been horrified.

Ingenious - winning is what counts.
Ask that mongrel, Donald, the Trump!
C,mon, hurry up Yanks and save the world by putting
this looney and his cohorts (arse lickers) behind bars.
Colin

Wow, I never heard this before. That is really interesting.

The Egyptians should have fought back with dogs.