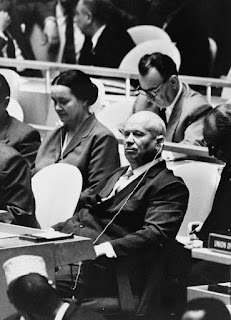 Nikita Khrushchev became infamous for many things, one of which was banging his shoe (which some debate actually is what he did) on a desk in protest at a U.N. meeting. The Soviet Union officially condemned colonialism, but he was enraged when a delegate from the Philippines called him out on the double standard as the Soviets had essentially built their own empire out of Eastern Europe.
Posted by Adam at 12:00 AM

As long as it didn't stink too bad

It's interesting how shoes have become symbolic in so many ways to different people. I've heard that throwing shoes on the Voice is a compliment!!!(lol) But I shudder to think what would happen if someone was actually hit and injured. Hugs and Happy Wednesday! RO

He was a laugh a minute, ol' Nikita.

And you know, Adam, I watched Walter Cronkite report that on the television.

He basically, and probably unintentionally, convinced much of the world that he was a lunatic hard-liner by doing that (ironically, he had was a liberal compared to Stalin)

Interesting what he did to get the attention he was wanting.

Of course he banged his shoe on the table. I have seen that clip more than once. Interesting that the shoe is wiped out in your above photo

I remember when he did it.