Fact of the Day: Worst Battle in American History 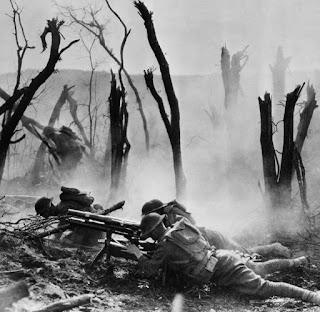 The Meuse-Argonne Offensive was one of the last chapters of World War I and the series of battles took the most lives in American history at over 26,000, quite a bit larger than the later Battle of the Bulge. The reasons for this is Spanish Flu, and the inexperience of many of the troops along with that there were 1.2 American soldiers there as well.
Posted by Adam at 12:00 AM

Email ThisBlogThis!Share to TwitterShare to FacebookShare to Pinterest
Labels: fact of the day, germany, world war 1

That is so amazing! And then we’ve got those parents who are opting not to let their children get vaccinated.

Oh my, wars, hopefully in the past.

My goodness, so sad that it happened! RO

World War I was a total bloodbath.

I've never even heard of this battle.
WW1 was horrible...my dad was in it but didn't go to the front lines to fight...he got really sick aboard the ship on the way over and spent 2 years in different hospitals until well enuf to be shipped home.

I think I read somewhere that the Spanish Flu may have even brought an end to that war as so many people were dying of it.

My father was a Medic in WWI and never talked about the war. His old gas mask was up in the attic when I was child. He got married late and was 53 when I was born- his first child.

I just watched a documentary on the Flu epidemic of 1918 which started in the States...I think Kansas-a cook for the army was patient 0. Due to the war, the press was not allowed to talk about it but no such laws were in existence for Spain who was a neutral country then. Since they talked about the flu, the Spanish Flu name was born. It took more lives than all the lives that were lost during WW1. If you want to watch an amazing, superb documentary on WW1, watch "They Shall Not Grow Old." It's directed by Peter Jackson and it is stellar!

When have you ever heard of anything factual.
One of the major battles of WW1.
Sea-sickness - that didn't stop others from actually fighting.!
Then again as it seems in the mad world of 1600 Penn. Avenue and the "inmates", maybe God intervened.
He supposedly is doing a lot (????) for Turnip Top at present.
"God sent Trump to save" etc etc. God help Israel with Trump support!
I've heard this "sent by God" before - God sent Adolf to save Germany.
I think from memory that Adolf "fucked" that up and the German people suffered.
Just a teenie weenie bit of history for you to consider???
Colin

PS: I hope the Irish didn't have a fit with your St. Patrick Day celebrations???? How pathetic.

Adam: The Battle of the Bulge was well after the above battle!
Like possibly 27 years.
Colin

War is hell. It has left its scars on generations of my family on both sides. I have tremendous admiration for those who volunteer to serve in our forces.