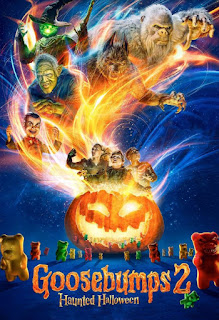 When I was a kid, I loved the Goosebumps books. They were a major reason I actually read books in school. No teacher ever told us to read them, we wanted to read them. I really liked the original major Goosebumps movie a few years ago with Jack Black. I thought he was going to star in Goosebumps 2 but instead he opted out for A House with a Clock in its Walls and reduced his role to a cameo thing. Can a sequel survive without its major star? 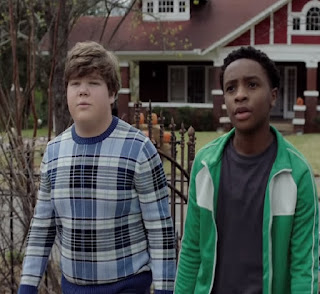 The movie doesn't really connect well at all with the events of the last film. Two boys named Sonny Quinn and Sam Carter find a spooky old house. While the two are dorky and picked on by bullies, they find something odd in this old house that will make them forget about the problems of the real world. They open up a strange old book. 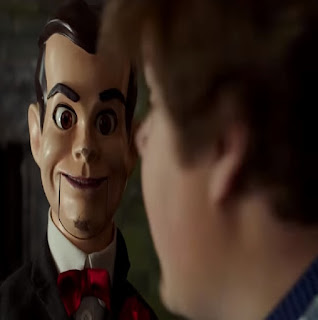 And awaken Slappy the Dummy. However Slappy actually helps them out at first. He saves the two lads from getting beat up by a bully, though he does this in secret. Sonny and Sam really start to freak out when they know Slappy is actually real and he's walking and talking. Plus he can make almost anything come to life. 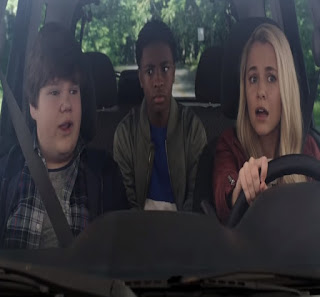 Slappy wants a "family" and he "adopts" Sonny as his brother, Sonny's sibling Sarah as his "sister", and even claims their mother as his mama. It doesn't take the Quinns long to realize that Slappy is a curse rather than the blessing he tries to pretend to be. But like R.L. Stein wrote him to be, Slappy isn't going to go away quietly. But will they be able to survive Halloween night, or will the whole town be doomed? 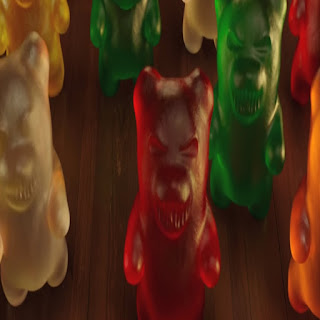 Overall Goosebumps 2: Haunted Halloween was a bad sequel to a good film. It's not horrible as a standalone film, but without Jack Black, it's plain and boring compared to the original. It also has little to do with any of the R.L. Stein books, so the plot feels rather generic and forced. Kiddos will probably like it, but 90's kids who grew up on the books will most likely be let down.

My kids all read and loved The Goosebumps books. I don't think the teachers were thrilled with the quality of the books but I was because they were reading!!!!

Yes, the quality wasn't great, BUT the children read and enjoyed it! It was a start.

I never read or saw the films. Lots of folks liked the books though.

My niece was big into these books. I am not a big Jack Black fan

Don't recall these at all.

I've seen the books, but read them or seen the movies.

My kids and I really liked the first one too, so it's sad to see Jack not return for this, but yeah....I guess he passed after reading the script. Are they gonna make a third one?