My (Not So) Favorite Quotes: God Wanted Trump to Be President 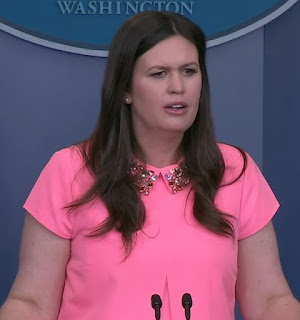 "I think God calls all of us to fill different roles at different times and I think that he wanted Donald Trump to become president, and that's why he's there."

Almost every tyrant in history has claimed their right to rule from a supernatural source. Most ancient kings claimed to have been the descendant of a god, while Christian monarchs claimed they were given their crown by God. Trump's lying PR secretary came up with this garbage a few months ago and it's just embarrassing. If Presidents are decided by votes (well in Trump's case Russia), and God can't touch free will, how does that work again? Trump as president is a prime example of an argument against the existence of any god.
Posted by Adam at 11:30 AM

It's amazing to me that such an evil man has *any* support from people who call themselves religious. You can go through the sins and he pretty much defines each one.

Such ideologies disgust me.

This one is a stomach churner.

OOO, I beg to differ...I have no doubts that Donald Trump was elected President because we needed a strong leader that loved the US and the people.

Such a crock of shit. It's hard to believe anyone supports this ideology and thinks highly of this selfish, childish and unethical egomaniac.

Sadly, both are quite embarrassing to the US and the world.

You BEG! We the sensible and rational do not beg to differ.
You are a total right-wing fanatical, bigoted, white supremacist bitch!
Find a gopher hole, preferably lime green and crawl down the bloody thing.
Colin

So true. Makes citizens of the USA cringe when overseas, that's if any are game enough these days with that looney in charge.
Colin

And now Pompeo says "it's possible" that Trump was sent by God to save Israel from Iran ~ well, in answer to a very leading question in an interview on the Christian Broadcasting Network. Situations like this make my skin crawl. I don't understand how "Christians" can support someone who is so not a Christian and stands for so many things that Christ did not.