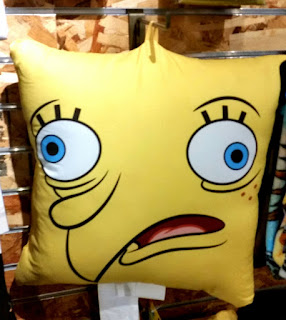 In a Spongebob episode, Spongebob sees plaid and something in his brain makes him want to act like a chicken. The face oddly became used as a mocking meme all over social media years later. And at Hot Topic, they have a pillow with that face. I almost couldn't believe it was real.
Posted by Adam at 12:00 PM

I haven't been to a Hot Topic in years. My daughter went to one recently and said it's not the Emo store it used to be. lol

SpongeBob is the best! And the shows are so funny.

Kind of reminds me of Bart Simpson too.

LOL- My grandson went through a phase where he was all about Spongebob. I remember that face!

Stay away from plaid, SpongeBob:)

Haha!!! That pillow is pretty funny.

I recall my sons were into spongebob.
Coffee is on