Fact of the Day: Alveda King Vs Rosa Parks 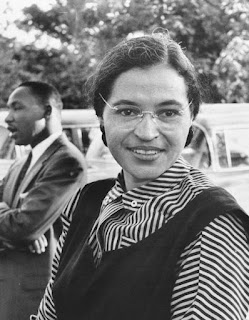 While most of Martin Luther King Jr.'s family became liberal Democrats, his niece Alveda King became a conservative Republican. While she tried to incorrectly paint her uncle as a symbol of her political philosophy, she did the same for Rosa Parks when she died in 2005. After her death, Alveda claimed Parks was a champion of the "pro-life" movement. Rosa Parks was pro-choice and supported a woman's right to choose. She strongly supported Plannned Parenthood and even served on its board for quite a number of years.
Posted by Adam at 12:00 AM

Email ThisBlogThis!Share to TwitterShare to FacebookShare to Pinterest
Labels: democrat, fact of the day, politics, republican

Martin Luther King Jr for ever.

I hadn't heard of Alveda King, but she even resembles her uncle.

Do Republicans EVER tell the truth?

Rosa was a smart woman.

Never heard of any of his family members

I don't know any of his family members, either.

Rosa was quite the political activist.

Never heard about her. But I love Martin Luther King!! He was amazing and brave.

"After her death, she claimed she was a champion of the "pro-life" movement."
I had to read it twice. I first thought it meant Rosa Parks issued a statement after HER death. I thought that would have been quite a trick.
Have pity on me. I haven't had my coffee yet.

So do I Debra. Broad brush statements can get you into trouble.

I didn't know anything about her.

Sure "bj" and the sun rises in the west and sets in the east, isn't that a fact. ha ha!
I doubt you'd know the truth if it was staring you in the face!
Colin

Rosa Parks was an amazing woman.

I didn't know about Rosa Parks involvement with the pro-choice movement and her work for Planned Parenthood. Now I have even more to admire about her!