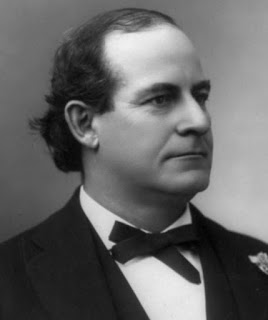 Failed presidential candidate William Jennings Bryan became one of the first opponents of teaching evolution in public schools. While future fundamentalist Christians would try to get the Bible forced into schools, Bryan never argued that the Biblical creation story belonged as a subject in a public school, let alone a science class.
Posted by Adam at 12:00 AM

Well, I never did.

Unlike today's religious fundamentalists, Bryan was on the Left. What he was afraid of (which doesn't seem to bother today's right-wing fundamentalists) was the doctrine of "Social Darwinism", i.e., there should be no social programs for the poor since it only gets in the way of their natural extinction.

By the way, I'm on the Left, and like most lefties these days, believe evolution should be taught in schools. I just wanted to point out how these issues, and the reasons why people support them, can change over time.

As a geologist, of course I support teaching evolution in schools.