Fact of the Day: Sam Houston Vs the South 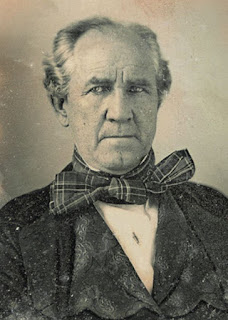 Sam Houston was a very important leader in the early history of modern Texas. Near the end of his life, he was the Governor of Texas during the outbreak of the American Civil War. He was one of the few in the South to be a unionist, and one so strong that he refused to let his state join the Confederate States of America. However he was forced out of office because of it.
Posted by Adam at 12:00 AM

I just read that Houston was named after him. Very cool.

I remember during the Obama years of Texans wanting to take the state out of the Union again. It didn't happen. A posthumous victory for Sam Houston.

That's quite the bow tie he's wearing, too.

Sam Houston is someone I'd find fascinating to sit down and talk with.