Fact of the Day: Trench Warfare 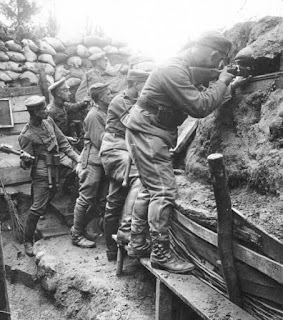 Trench warfare was most used during World War I, after the war it was used in a minor role in World War II and rarely after 1945. The reason why is that World War I reached a period of human history where firepower in weapons far increased but not mobility of the soldiers.
Posted by Adam at 12:00 AM

Email ThisBlogThis!Share to TwitterShare to FacebookShare to Pinterest
Labels: fact of the day, world war 1

"The reason why is that World War I reached a period of human history where firepower in weapons far increased but not mobility of the soldiers."

We often hear about guns vs butter, but guns vs transportation? Apparently it was debate that nobody thought worth debating back then.

That must have been so scary to be in that situation.

The foulest of types of warfare. The trenches full of mud,slime, dying and decayed bodies.
No wonder so many who survived were forever in a state of shock etc etc.
Terrible beyond comprehension.
Colin

Thank goodness this abominable form of warfare has decreased. Those who survived were never the same. The horrors Tolkien experienced in World War I, especially during the Battle of the Somme, affected him profoundly and found expression in his masterpiece "The Lord of the Rings."

It must have been horrible to be in a fox hole with dead and dying people.