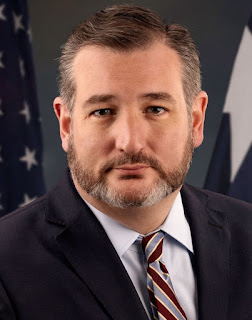 "Lucifer in the flesh (Ted Cruz). I have Democrat friends and Republican friends. I get along with almost everyone, but I have never worked with a more miserable SOB in my life."

When it came to his role in Congress and as House Speaker, I thought John Boehner was a horrid excuse for a public servant. He led the Republican House in an era where they opposed Obama at every turn for the sake of being petty. Which makes this quote on his fellow conservative Ted Cruz rather funny. I knew Ted Cruz was a pathetic excuse for a human being, but even most of his "friends" don't like him.
Posted by Adam at 11:00 PM

Seriously. I don't even know how he can look at himself in the mirror. Supporting Trump even after all that Dotard said about him. What a joke.

Poor little Ted Cruz - a pitiful example of a useless, insincere human being.
Why spoil my day, Adam, by putting this up????
Cheers
Colin

I have the same feeling about him... He comes off as a real pain in the ass.

My s-i-l refers to Cruz as "Lizard Man." He makes my skin crawl, and the way he slithered up to lick Trump's boots after how Trump trashed him and his wife is beyond disgusting and pitiful.