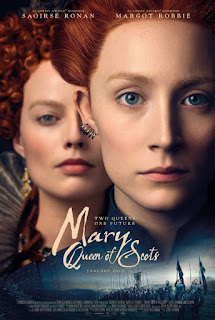 When I first heard about this new Mary, Queen of Scots movie, I was excited. I really really like Saoirse Ronan as an actress, and I have a soft-spot in my heart for Margot Robbie too. Both of these talented ladies have come close several times at getting an Oscar, but this film seemed like a good chance for either. That's until the Oscar nominations came about, and the film got nothing. Was that a  big clue? 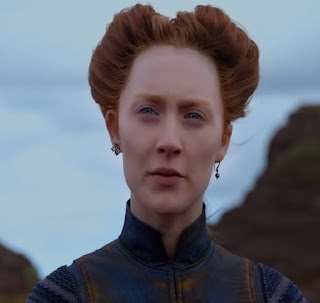 The film is (duh) based on the life of Mary I of Scotland. While she spent most of her life in France, and ruled for a tiny bit as Queen-consort of France until the death of her first husband, Francis II of France. Her mother (now dead) and bastard half-brother have ruled the country in her absence, but now she's back to rule, as the Queen and not a consort. 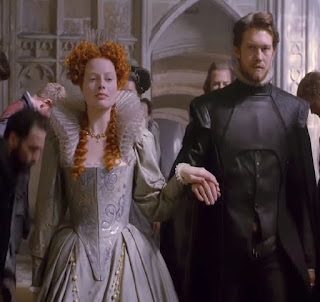 However she is well noticed by her first cousin-once removed, Elizabeth I of England. The Tudor Queen is on-paper friends to her "cousin" but she sees her as an enemy. Since Mary Stuart's great-grandfather was Henry VII of England, Elizabeth I knows she has a claim on the throne and her likely heir. 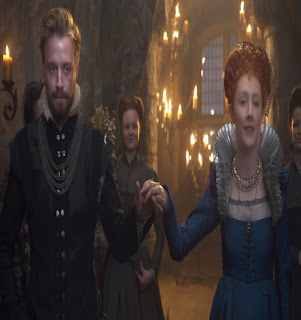 Things get even more tense when Mary seems to close to marrying her cousin Henry Stuart who is known better as Lord Darnley. Both countries have protestant majorities, though it wasn't long ago that Catholicism was the only faith tolerated. English lords do not want a Catholic as monarch again, and the Scottish lords aren't too happy with Mary. While both Queens should be close as sisters, their enemies will make them enemies of each other. 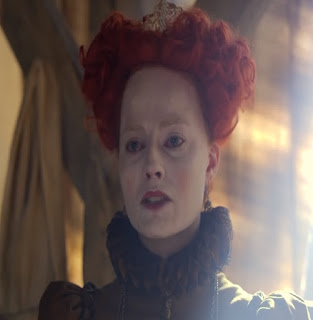 Overall I can see why Mary, Queen of Scots' 2018 incarnation of the historical events didn't get a single mention at the Oscars except for Best Costumes and Best Makeup (losing both) this year. The direction of the story is pure garbage, and while they have plenty of acting-talent, the film is just flat. While most of the actors don't look like the people they portray, I at least know who they were, so that made it easier to follow the story. I suppose those ignorant with British history will be lost for the most part. It has its strengths, but many faults.

Sorry this didn't turn out to be more enjoyable. I didn't watch it because I just didn't see how it could have a good outcome, which is one of my requirements for movie viewing;)
Wishing you and Daisy a Hoppy Easter.

I did watch this, The costuming was amazing,

Thanks for the review, Adam. I'll probably pass since you gave it a C, and there are so many movies out there than I haven't seen. We watched "Crazy Rich Asians" last night. It was enjoyable, but I found it implausible. Boy, Singapore has changed since we were there. We probably couldn't afford it now.

I thought about seeing this one, but think I'll pass now.