Spider-Man: Into the Spider-Verse (2018 Film) Review 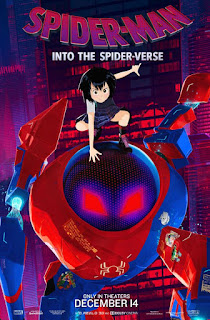 With a deal with the MCU (though Sony still is the main company behind the stand-alone Tom Holland films), many wondered what Sony was going to do with the Spider-Man franchise. One of their ideas was to create a new universe with Venom (with Tom Hardy) and a better idea was to make an animated movie that would be able to tap a deeper comic story that would be hard to achieve in a live-action adaptation. With nearly a half-century of plots, Spider-Man has a lot to offer. 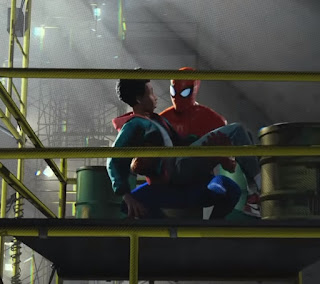 Though the story's main character is not Peter Parker, but a teenager named Miles Morales. In his universe, Spider-Man (Peter Parker) is a well-known hero. However Miles gets bit by another fancy radioactive spider and gets very similar powers to his idol. As he starts to learn his powers, he manages to find Spider-Man fighting Kingpin and other bad guys. However, and sadly, Peter is murdered while Miles escapes. 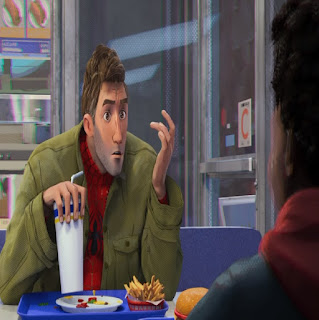 However another Peter Parker emerges as Kingpin had a machine that was causing some crazy stuff with dimensional travel. This Peter Parker is a little older than the one Miles knew. His Aunt May had passed away, and he also got divorced from Mary Jane Watson. Miles isn't really sure this Peter Parker will be a good sensei. 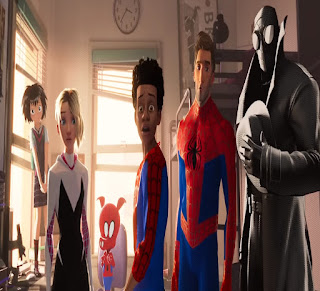 However they both learn they aren't the only spider-men or even spider-people to show up. You have a Gwen Stacey who became a super-hero instead of Peter Parker. Then you have Spider-Man Noir who exists in a really neat universe of cool art. There's also Peni Parker, a spider-girl from the future who has her own spider-robot. Then there's Spider-Ham...um yeah. But all of them will have to work together if they want to save the world and go back home to their own universes. 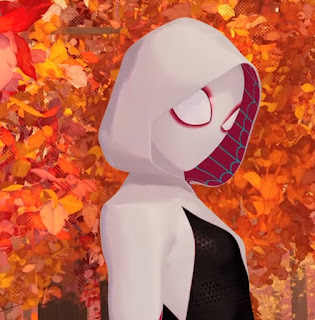 To be honest, Spider-Man: Into the Spider-Verse disappointed me a little. I wasn't expecting anything to rival Spider-Man 2 in my heart, but it's an uneven film. I do like its sense of humor and most of the spider-people. But Miles is dead-weight for most of the film, and there are too many villains and side-characters to stomach for such a short time. That being said, I do hope there is a sequel. I really hope that Sony can convince Marvel/Disney to allow them to use Deadpool as even a cameo character. I'd think that would be pretty neat.

I rented this one and enjoyed it so much that I rented it a second time! Lots of fun!

Sounds like there're a lot of threads to weave together in this one.

this would lead it in a new direction, for sure.