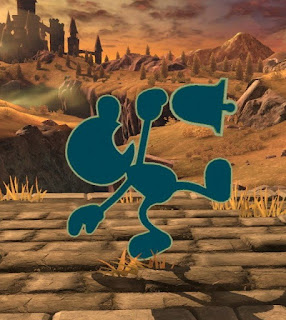 A series regular since Melee, and technically the series' oldest fighter. This guy predates Mario and Pac-Man. Nintendo made a bunch of tiny handheld systems with Game and Watch titles, and that's where he's from. I actually played a Gameboy collection of some of those old games, so I'm one of the few whose played his games. 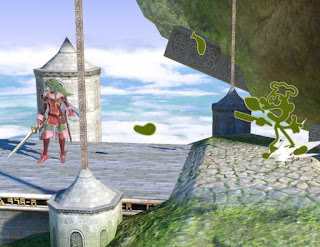 Mr. Game and Watch isn't much different. He's been about the same since Melee. He's an odd but clever fighter. Not many characters can outclass him with ease. 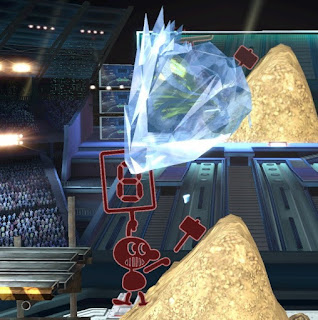 His best weapon is the hammer. The higher the number, the better the damage. Though only 8 and especially 9 are worth the effort. 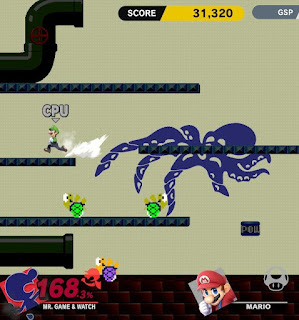 His final smash is Octopus which is something he never was in the game, but a villain that tried to attack him when he went deep see diving. It's an okay final smash, but it's a little weak, though hard for players to dodge. 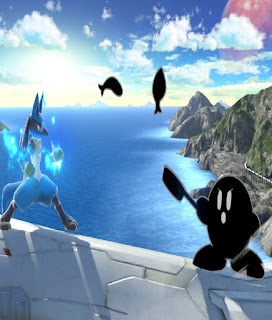 When Kirby takes Mr. Game and Watch's powers, he can use the frying pan ability. Like the real deal, it's a decent move that can cause opponent to back off as it's hard to break its defense at first. 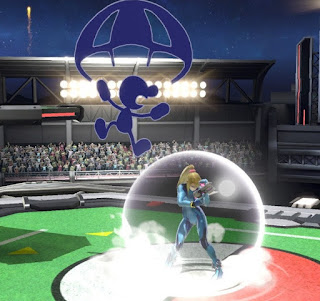 Online I did decent with Mr. Game and Watch. He's got decent power and some good moves at his belt. His jump and recover ability is also very handy, while he's light in weight, he really can prove hard to knock off the stage.
Posted by Adam at 11:30 PM

This just reminded me of the Game and Watch we played as kids! My sisters and I each had a fave. Mine was the chef one where he has to catch the food:D