Fact of the Day: Battle of Cannae 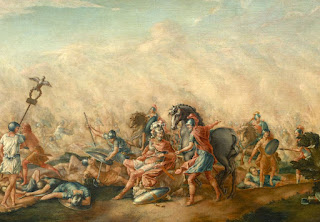 Before Rome became the ultimate superpower in Europe, the Roman Republic suffered a huge loss against its rival Carthage. Hannibal lead his army and totally massacred about 80,000 Roman troops (virtually all their soldiers on the battle) which not only weakened their overall military but brought depression all over the Roman Republic. But by the end of the 2nd Punic War, Rome did win the overall war.
Posted by Adam at 12:00 AM

Email ThisBlogThis!Share to TwitterShare to FacebookShare to Pinterest
Labels: fact of the day, Italy, roman empire

Never heard of it.
Coffee is on

Rome sure kept ticking, for a while at least

Wars are so horrible.

Your US General of WW2 fame and infamy ( slapping of a war weary/shell shocked soldier) George Patton was according to him involved in all this Punic Wars.
Much to the amusement of his staff and other Allied commanders.

I wonder how/what George would think of your present "Comander-in-Chief, the draft dodger? I would have applauded George was whacking Turnip Top and I would have joined in as I am sure General Mattes ( recently sacked) would have done. Such a pity the ex-Secretary of Defense hadn't done so.
Colin

Oops - Sorry to the General - it is MATTIS.
Colin