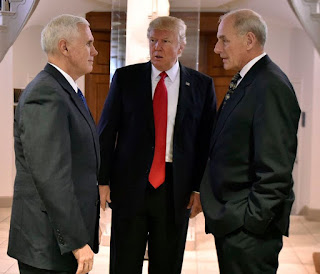 In the 1920's, a postmaster in Oregon was removed from office by President Woodrow Wilson. The case went up the Supreme Court where they ruled that the President can remove an appointed official from federal office for virtually any reason. One of the few exceptions is Vice President, where they have to be impeached and removed by Congress.
Posted by Adam at 12:00 AM

Rules and regulations, must at time takes sorting out.

Add more to a power trip

Wow that is power.

Impeach the cheeto first before the VP...although it would be great if you guys can impeach both, eh? :P

Us voters can still remove a president.

That's a lot of power.

Get rid of the two clowns - Trump and the little Goebbels "Pense-Trump"
and that female mouthpiece Sarah Hucklebee-Sanders and we may have sense prevailing within the walls of that White House - presently the lunatic asylum of Washington, DC.
Colin