Fact of the Day: Shinto-Buddhism 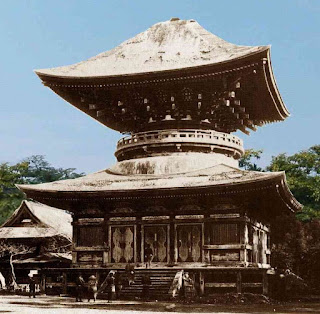 Quite early on after Buddhism was introduced to Japan, instead of contradicting the native Shinto religion, the Japanese people as a whole assumed both were true and the two religions started a strange and complicated mixture. This would go on for many centuries until the 19th caused some friction. Nationalists wanted to separate Buddhism from Shinto, seeing as Shinto was from Japan while Buddhism was foreign. While a new government under Emperor Meiji tried to sever the two faiths, the policy failed to do so in the long-term.
Posted by Adam at 12:00 AM

Email ThisBlogThis!Share to TwitterShare to FacebookShare to Pinterest
Labels: Buddhism, fact of the day, japan

Interesting and something I hadn't thought about until now.

Nice article. It about complicated thing in Japan: religion, history, the wishes of the people, & government policy. I follow your blog now. Thx

Yes, we noticed that when we were in Japan. Buddhist and Shinto shrines often occupy the same spot. People said they go to the Buddhist temple for the "big occasions" of life like marriage and funerals, but go to the Shinto shrines for "everyday" occasions.

I think Shintoism has more rituals and such that people have to practice than Buddhism, but I don't really know too much about both to say I can tell the differences. I do know a lot of the KonMari practice stems from Shintoism (ie.thanking items for serving their purpose).